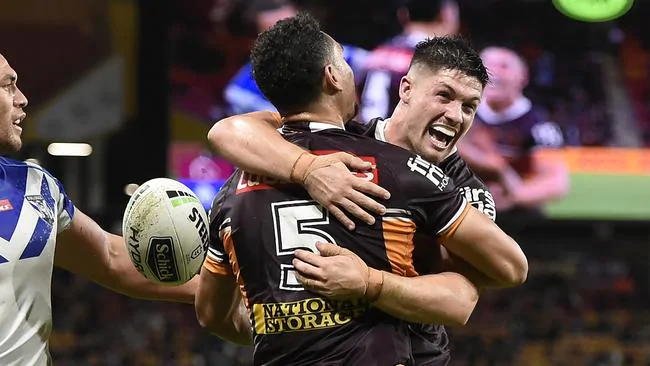 The Brisbane Broncos have returned to the winners circle with a big win over the hapless Canterbury Bulldogs.After weeks of criticism, speculation and constant criticism, the Broncos have finally tasted victory again after last tasting victory on March 20 against the Rabbitohs in Round 2.
Kayo is your ticket to the 2020 NRL Telstra Premiership. Every game of every round Live & On-Demand with no-ad breaks during play. New to Kayo? Get your 14-day free trial & start streaming instantly >
It was just what the doctor ordered for the Broncos but for those other than the Broncos’ most ardent apologists, the long awaited third win of the year will do little to convince fans that the side have turned a corner after losses to the Titans and the Warriors in previous weeks.
The three-game run was expected to be a walkover for the NRL’s biggest club but the side could claim just one win in the run.
But a win is a win.
The Broncos came out strong with two tries in the opening fifteen minutes to look like they were going to blow the last-placed Bulldogs off the field.
A try to the Bulldogs’ Nick Meaney in the 28th minute going acrobatic in the corner left the door open however. Having given up a lead against the Warriors last week, there were suggestions that it may have had ghosts for the Broncos in a similar situation after the shock loss last week.
But Anthony Milford booted a pinpoint kick into the in-goal with Jamayne Isaako winning the race for a long distance try.
A penalty goal and an easy try in the corner for Xavier Coates gave the side a 22-4 lead with 20 minutes left but against an attack deprived Bulldogs, who averaged just 10.8 points per game, was always going to be too far.
Dallin Watene-Zelezniak scored another for the Bulldogs, but Isaako sealed the win after a miracle offload from Tevita Pangai Jr. as he was being bundled into touch by four Bulldogs.
The Broncos suffered a big loss as well with Alex Glenn injured after a possible cannonball tackle, with the skipper reporting he “heard a pop”.
Social media was happy for the Broncos after a dire six-game losing streak.