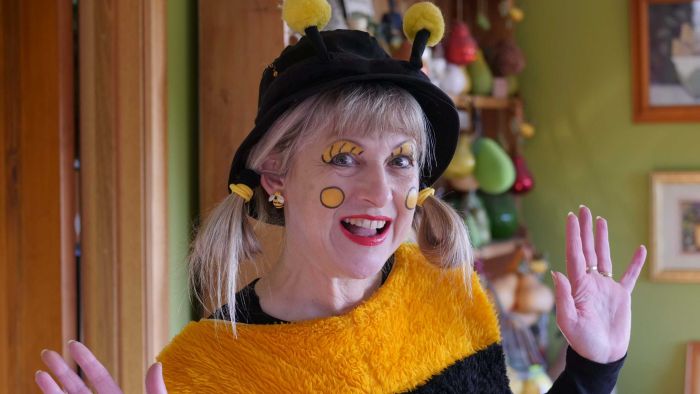 It’s not unusual for Michelle Pears to do her grocery shopping dressed as a clown or a fairy.
After all, it’s her work uniform.
“I often get some funny looks from passers-by or tourists coming to our town thinking, ‘What’s that all about?'” she said.
“The locals know what I do and give me a big smile.”
Ms Pears is a children’s entertainer and singer-songwriter, best known for her character Mrs Bee.
“I’m usually buzzing around as Mrs Bee, or fluttering off as the purple fairy, or going to schools as a scarecrow,” she said.
“I’ve written songs since I was a little girl, I think I was a five-year-old.
“I’m probably the most famous clown in Sorell, but there are quite a few others living in Sorell I think ‘she said with a wink’.”
Michelle Pears’ scarecrow delights the kids and presumably terrifies the birds.(Supplied: Michelle Pears)
Coronavirus live news: Follow all the latest information in our blog.
A magic paddock for a purple house
Ms Pears and husband Stephen bought their “paddock” in the Penna Valley 17 years ago, when they were living in nearby Midway Point.
Growing up inland on a farm near Colebrook in the southern midlands, Ms Pears was always fond of the Sorell area and wanted to be closer to the water.
“I always thought there was something magical about seeing the sea, having lived inland in my childhood,” she said.
She said she knew instantly that the paddock was theirs.
“I walked over the bank and there were five swans swimming down the rivulet, and I just knew that this was my place,” she said.
“And luckily I talked Mr Pears into buying it as well.
“Well I actually said, ‘If we don’t buy this, I’m divorcing you!'”
Michelle Pears grew up on an inland farm and fell in love with Sorell.(ABC Radio Hobart: Georgie Burgess)
A fetish for pears
The Pears raised their two sons in the Purple Pear Cottage that Mr Pears built.
The house backs on to the Orielton Rivulet, which is a protected wetland under the Ramsar Convention.
“The rivulet acts like a highway, there’s always something interesting going up and down,” she said.
Aptly named, the house is full of all things purple, and lots of pears.
“I have a pear-collecting fetish,” she said.
Michelle Pears’ collections of pears features in her home.(ABC Radio Hobart: Georgie Burgess)
“I’ve got three rooms of costumes and retro outfits, I would say I have a bit of a problem, I’m a bit of a hoarder.
“I think all up I’d have thousands of costumes, and when I’m too old to be bouncing around or buzzing around as a bee I think I’ll open my own costume shop.”
Ms Pears has been heavily involved in the arts scene in Sorell since 1993, and was a founding member of South East Arts and Sorell on Stage.
“I love living in my community, and hope that one day we will have an arts and culture, environment and heritage centre in Sorell to help showcase our diverse history,” she said.
“This is my dream.”
One of Ms Pears’ children’s characters is the purple fairy.(Supplied: Michelle Pears)
Mrs Bee flies online
A normal work day for Ms Pears usually involves performing to school groups, pre-schools or birthday parties.
When COVID-19 hit, Ms Pears lost most of her work.
“During COVID-19 I decided to not put my head under the pillow and cry because I couldn’t go out and perform,” she said.
“So I created a magic land in my back bedroom, and the world of make-believe went online.”
Children’s entertainer Michelle Pears set up a make-believe world in her back bedroom during COVID-19.(Supplied: Michelle Pears)
Mrs Bee broadcast live through a makeshift set to social media, entertaining children who were also housebound.
“I’ve had children watching from all around Australia, it’s been very exciting,” she said.
Ms Pears has created quite the following of children, and has plans to continue broadcasting.
“I’m very much a clown, you shouldn’t take life too seriously,” she said.
Michelle Pears has been working from home during the coronavirus crisis.(ABC Radio Hobart: Georgie Burgess)