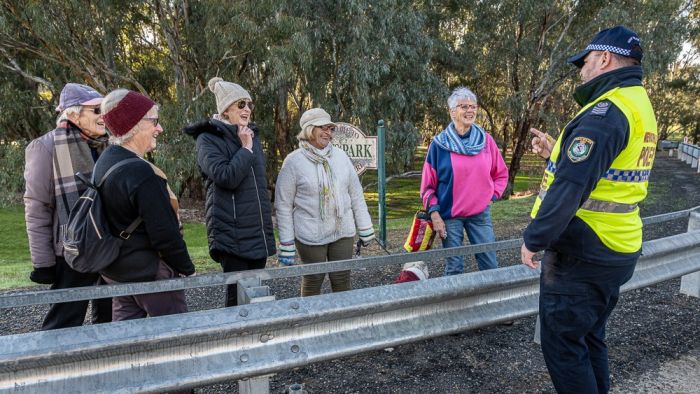 It’s just 28 kilometres west of the busy Albury-Wodonga crossing, but life in the NSW border town of Howlong couldn’t be more different.
There is no massive queue of cars lining up at the police checkpoint.
Just a line of locals here to welcome out-of-town officers overseeing the border crossing since the closure came into effect early on Wednesday morning.
Coronavirus live news: Follow all the latest information in our blog.
Lurlene Hanna and her friends were on their weekly walk when they stopped to chat with one officer patrolling the bridge over the Murray River.
“[He told us] they had a little fire, but they didn’t have enough wood, so the people of Howlong took down wood so that they’d be warm and comfy down there,” she said.
“The bakery’s taken them down food and coffee they’ve been very well looked after.”
Drivers experience long delays at Albury-Wodonga’s border crossing.(ABC News: Brendan Esposito)
But 28 kilometres away in Howlong, there’s hardly any wait.(ABC News: Brendan Esposito)
Ms Hanna, 70, isn’t surprised by the officers’ reaction to local hospitality.
“Everybody that comes to Howlong says, ‘I didn’t know what a lovely place it is’.”
Ms Hanna said traffic was moving freely into Howlong and the border closure had had little effect on most people in town.
The Howlong crossing had been so quiet, she said, people were starting to use it as alternative to Albury-Wodonga, where the queues could take up to an hour.
Another Howlong local, Rex Forrester, said while he wasn’t personally affected, he felt very sorry for young people with mortgages and for businesses who would bear the brunt of the border closure.
Howlong NSW resident Rex Forrester on his property.(ABC News: Brendan Esposito)
Howlong local Rex Forrester says border permits should be extended to 30 days.(ABC News: Brendan Esposito)
Rex Forrester said he’s concerned about small regional businesses.(ABC News: Brendan Esposito)
“Little regional businesses they’ve already had a whack with the fires, they’ve already had one lockdown. They’ll never recover from this,” he said.
Read more about coronavirus:
Mr Forrester, 68, who restores vintage cars and steam engines as a hobby, said the NSW Government should increase border permits from 14 days to a minimum of 30 days to reduce red tape.
“Businesses are going to have to go through all that paperwork for their employees and that’s just another inconvenience that we don’t need at the moment.”
Mr Forrester said he felt people in regional NSW and Victoria were being punished for an outbreak that began in Melbourne.
Almost an hour’s drive west, Paul Bramich and his family soaked up the last couple of days of their holiday at Mulwala, a town known for its eponymous lake which was formed by the damming of the Murray.
Paul Bramich and son Riley cast a line in Mulwala before going home into lockdown.(ABC News: Brendan Esposito)
Mr Bramich said his family wanted to support local tourism.(ABC News: Brendan Esposito)
They left their Hillsdale home in Melbourne’s north-western suburbs before Greater Melbourne was returned to Stage 3 restrictions.
“It’s actually nice being in NSW, where it’s not like that,” Mr Bramich said.
“We’re all symptom-free and healthy and now we’re going back to Victoria where everyone’s in lockdown again.
“A one-way ticket across the border is all we’ve got now we can’t come back.”
Vehicles line up for police checks on Mulwara Bridge.(ABC News: Brendan Esposito)
The family, who are regulars at the local caravan park, had been spending lots of time outdoors fishing on the Murray backwaters, walking and riding bikes before heading into lockdown.
“We’re not looking forward to it honestly, because the kids are going to be cooped up,” Mr Bramich said.
“We want to do the right thing but we are going to be stuck inside as soon as we get home.”
Mr Bramich said the family had been unsure whether to go ahead with their holiday, given the coronavirus outbreak in nearby suburbs, but wanted to support the local tourism industry.
“We got the boat serviced down here and it wasn’t due for a few months, just to put money back into the economy.”
What you need to know about coronavirus: