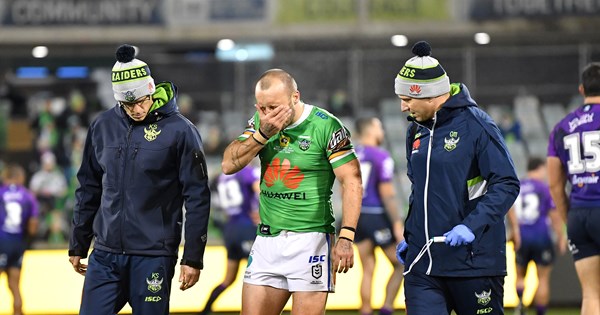 The Raiders have suffered a devastating blow in the first half of their 20-14 loss to the Storm with inspirational co-captain Josh Hodgson leaving the field with a suspected ACL injury to his right knee.
Hodgson, who had a reconstruction on his left knee in 2017, hobbled from the field in the 28th minute after rushing up in defence to tackle Cameron Smith his knee buckling in the process.
The game was stopped for several minutes while the Raiders lost Bailey Simonsson to the sin-bin for a professional foul in the same play.
Melbourne scored immediately after Hodgson’s departure to lead 12-6 before half-time.
Raiders hooker Josh Hodgson.©Gregg Porteous/NRL.com
The Raiders hooker was later pictured on the Fox Sports broadcast sucking on the green whistle in Canberra’s dressing room.
He is expected to be sent for scans on Sunday.
Compounding the woes for Canberra they also lost winger Bailey Simonsson to a shoulder injury in the second half.
The Raiders’ depth will be sorely tested in coming weeks as they are also without Sia Soliola (facial fracture) until the finals and Emre Guler (ankle) for at least another six weeks.
Firebrand foward Corey Horsburgh is out with a foot injury and Englishman John Bateman is nursing a long-term shoulder injury.