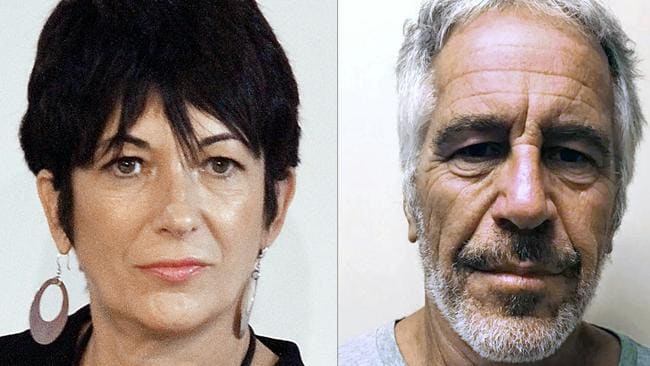 Ghislaine Maxwell has begged for release from jail on £4 million (A$7.2million) bail pleading with a judge: Im not Jeffrey Epstein.Lawyers for the heiress filed court paperwork on Friday trying to spring her free by claiming she was not a flight risk and could catch the coronavirus in prison.
Maxwell announced her intention to “vigorously” defend herself over claims she groomed victims of her paedophile billionaire ex-lover Jeffrey Epstein.
Maxwell also risked provoking a firestorm by appearing to blame Epstein survivors for whipping up a frenzy around her.
“Sometimes the simplest point is the most critical one: Ghislaine Maxwell is not Jeffrey Epstein,” her legal papers on Friday said.
“She was not named in the government’s indictment of Epstein in 2019, despite the fact that the government has been investigating this case for years.
“Instead, the current indictment is based on allegations of conduct that allegedly occurred roughly twenty-five years ago.
“Ms Maxwell vigorously denies the charges, intends to fight them, and is entitled to the presumption of innocence.”
RELATED: How Maxwell avoided arrest for so long
Maxwell, 58, has been charged with grooming children as part of Epstein’s sex trafficking ring.
Her lawyers, in an earlier court filing on Thursday, called the allegations “meritless”.
The legal papers lodged on Friday will be argued before a judge at a bail and arraignment hearing in New York on Tuesday.
In them, her lawyers argued that she was at “significant risk” of contracting COVID-19 at her jail – Brooklyn’s Metropolitan Detention Centre. They say coronavirus “has begun to spread” throughout the jail.
The documents – which claim Maxwell is only facing 10 years in jail, not 35 – reveal that she has been in contact with prosecutors following Epstein’s arrest, up until her own on July 2.
She was arrested at a £800,000 home in New Hampshire.
They state: “Throughout the course of the criminal investigation of this case, which has been publicly reported on for nearly a year, Ms. Maxwell has remained in the United States.
“Indeed, on July 7, 2019, the day after Epstein’s arrest, Ms Maxwell reached out to the prosecutors in the Southern District of New York, through counsel, and maintained regular contact with them right up to the point of her arrest.”
Prosecutors – in a detention memo last week – had revealed that Maxwell had been on 15 flights abroad in the last three years.
But lawyers for the socialite, in court papers filed yesterday, claimed that fact “obscures the critical point” that she has not left the US since Epstein’s arrest in July last year.
Her legal team even blame Epstein’s alleged victims for adding “fuel to the fire” by calling for her prosecution – stating she had been “substituted” for the billionaire paedo after his death.
As a result, she claims there has been a “crushing onslaught” of negative publicity.
RELATED: Ghislaine prepared to snitch on ‘big names’
Maxwell’s lawyers suggest that she was only arrested so that she was in custody in time for the one-year anniversary of Epstein’s arrest.
Her court papers state: “Far from ‘hiding’ she has lived in the United States since 1991…and has not left the country even once since Epstein’s arrest a year ago.
“The absence of any allegation by the government that Ms Maxwell was taking steps to leave the country at the time of her arrest is conspicuous.
“The government has offered no proof that she was making plans to leave the country.
“In fact, had the government alerted her counsel that she was about to be arrested, we would have arranged for Ms Maxwell’s prompt, voluntary surrender.
“Instead, the government arrested Ms Maxwell without warning on the day before the July 4th holiday, thus ensuring that she would be in federal custody on the one-year anniversary of Epstein’s arrest.”
Maxwell’s own “close” family are standing by her, the court papers claimed, including her six siblings and nephews and nieces.
Two of her sisters were said to be among six people who have agreed to co-sign her multimillion-dollar bail package – which includes travel restrictions and a GPS tag.
The court papers state: “They all stood by her in the aftermath of the July 2019 indictment of Epstein and continue to stand by her now.
“She is especially close to two of her sisters and their children, all of whom reside in the United States.
“Ms Maxwell’s family and friends have remained committed to her because they do not believe the allegations against her, which do not match the person they have known for decades.”