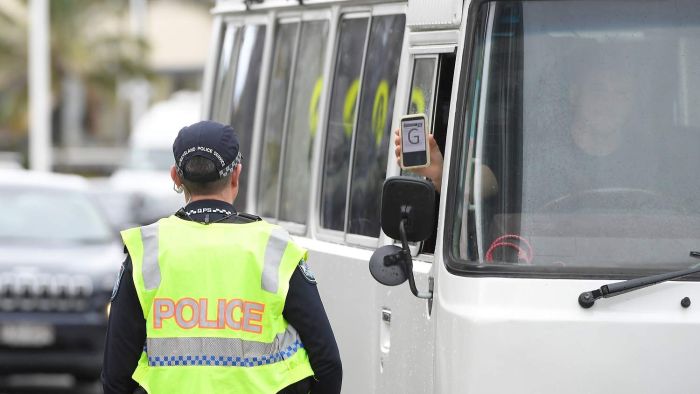 A surge of arrivals to Queensland face waits at the border, a day after the state lifted coronavirus travel bans on most interstate visitors.
Key points:

A major police operation continues to screen arrivals including at the busiest border crossings at the Gold Coast, where tourism operators are banking on an influx of New South Wales school holiday revellers.
Meanwhile, Queensland has recorded two new cases of coronavirus, with both from people returning from overseas, taking the state’s total to 1,070.
Three are now listed as active.
Almost 420,000 tests have been carried out since late January in Queensland.
Police said motorists queued for an average of 35 minutes at Gold Coast checkpoints after the border reopened on Friday, ending almost four months of self-imposed quarantine for Queensland.
But others reported only a two-minute delay crossing the border at Numinbah, less than 50 kilometres west.
Queensland COVID-19 snapshot:

Latest information from Queensland Health.
More than 314,000 people as of yesterday had downloaded passes to enter Queensland within seven days.
But travellers from Victoria, which yesterday recorded Australia’s single biggest daily rise in COVID-19 cases, have been barred from entering.
This applies to people who have visited Victoria in the past 14 days, but not to returning Queensland residents, or those granted a rare exemption.
Gold Coast police Chief Superintendent Mark Wheeler said travellers should consider entering Queensland “perhaps late at night or earlier in the morning” to avoid delays.
“If you have kids on board make sure you have some food, some water, and some supplies,” he said.
Heavy traffic as Queensland opens its border to travellers from NSW on Friday
Further west, visitors had reportedly gathered in their hundreds in regional New South Wales towns before the border opening.
Police Commissioner Katarina Carroll said more than 700 people had been turned around prior to the border reopening.
Caravans line up at the Goondiwindi checkpoint on Friday.(ABC News: Lucy Robinson)
Coronavirus live news: Follow all the latest information in our blog.
Airports ‘fairly quick and efficient’
Airports are expecting tens of thousands of arrivals in the next week, including in Far North Queensland where COVID-19 has reportedly cost tourism operators $1 billion already.
Chief Superintendent Wheeler said 332 passengers arriving on two flights at the Gold Coast were screened without any “quarantines or turnarounds”.
He said police would be “happy” to admit Victorian residents who could prove they had spent the previous 14 days outside their home state.
The first passengers arrive at Sunshine Coast Airport on Friday since the border reopened.(ABC News: Tara Cassidy)
Queensland Tourism Industry Council chief executive Daniel Gschwind said operators reported an “inundation of stickered cars driving around the Gold Coast” on Friday afternoon, sporting the appropriate border passes.
Mr Gschwind said the Whitsundays had gone from zero incoming flights to 17 over the next week, reaching 44 weekly flights by the end of the month.
He said Cairns had welcomed 750 travellers who arrived on five fights.
“We were hoping obviously for very good news by the end of the day and it seems to have now materialised,” Mr Gschwind said.
Read more about coronavirus:
Rob Patterson, who arrived at Brisbane Airport from Sydney, said the screening checkpoints were “fairly quick and efficient if you have your right paperwork and ID and everything”.
“We sort of went through within two, three minutes,” Mr Patterson said.
Coronavirus questions answered
Breaking down the latest news and research to understand how the world is living through an epidemic, this is the ABC’s Coronacast podcast.
Read more
Fay James, who arrived with her family of four from Sydney for a holiday on “the islands”, said the border safety measures were in contrast to the usual cramped conditions on a domestic flight.
“You’re jammed in the seats, you’ve got your mask, but there’s no social distancing,” Ms James said.
Bev Morgan from Sydney said she had been waiting “four months since lockdown to come up and visit our grandchildren”.
“We’re very excited we were going to line up at the border if they weren’t going to let us in,” she said.
Ms Morgan and her companion arrived in a mask.
“This is the first time we’ve worn them since we went into lockdown but getting on a plane was scary,” Ms Morgan said.
The carousel at the Brisbane airport on Friday.(ABC News: Tim Swanston)
Stay up-to-date on the coronavirus outbreak
Her companion, who did not give his name, said the screening process “just needed a little more planning to spread everyone out”.
“The plane was okay but getting off on the concourse, where they’re all checking your documentation, we were a bit squashed in,” he said.
“It didn’t need to be that way they knew we were all coming they just didn’t plan enough.
“There’s only like two or three planes and we’re all squashed in in one place and when the airport’s big, they should have spread us out a bit.”
Annastacia Palaszczuk asks travellers to be patient ahead of borders opening in Queensland
What you need to know about coronavirus: