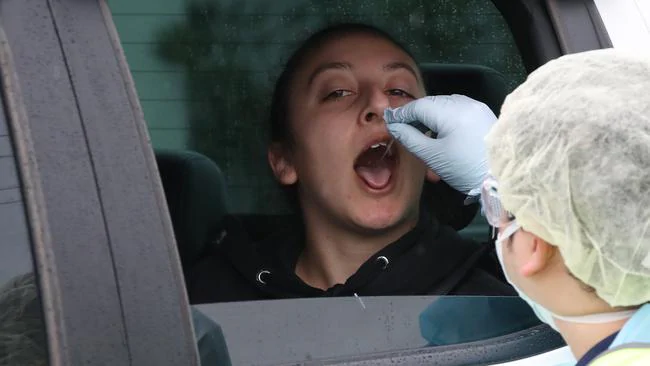 NSW is now at a critical point of containment with five cases of coronavirus community transmission all linked to a pub in Sydneys south west.A man from the Blue Mountains tested positive for coronavirus yesterday after visiting the Crossroads Hotel in Casula on July 3, NSW Health confirmed this morning.
His three housemates have all also tested positive to coronavirus, however, they will be included in tomorrow’s state figures.
The new case follows the diagnosis of a woman earlier this week who had also been at Crossroads Hotel on the same night, with the “only known link” between the pair the pub.
RELATED: Follow our coronavirus coverage
MELBOURNE MAN TESTS POSITIVE AFTER CROSSING BORDER
There were seven new cases of coronavirus diagnosed in NSW during the 24 hour period until 8pm last night, with five of them returned travellers in hotel quarantine.
The other cases include the Blue Mountains man and a traveller from Melbourne who drove across the border and entered NSW last Tuesday.
The traveller from Melbourne is now in hotel quarantine along with three identified close contacts.
NSW Health say the man had “minimal contact” with anyone else besides these three people.
Anyone feeling unwell is being urged to get tested, with extended hours clinics now available at Liverpool, Campbelltown and Fairfield Hospitals.
“There’s been recent community transmission of COVID-19 in NSW so we’re at a critical point in the fight to contain the virus,” NSW Health’s Dr Jeremy McAnulty said today.
“It’s essential that we all take the risk of transmission very seriously and take steps to protect ourselves and loved ones.”
TEMPORARY CLINIC SET UP IN PUB CARPARK
Crossroads Hotel has been closed so that cleaning and tracing of patrons could take place, NSW Health Minister Brad Hazzard confirmed yesterday.
Under current restrictions pubs, clubs and cafes are required to keep a list of the names and contact details of all the people to attend the venue.
“So if the hotel has complied in that way we’ll have hope we would have access to those names,” Mr Hazzard said.
A temporary coronavirus testing clinic has also been set up in the pub’s carpark, which locals have flocked to today in order to get swabbed for the virus.
Lengthy queues of cars were seen snaking into the Crossroads Hotel car park this morning, where cleaners were inside the pub disinfecting the venue.
FEARS OUTBREAK COULD SPREAD TO NSW
With five confirmed cases of community transmission NSW Health are moving swiftly to try and prevent Sydney’s outbreak from spreading it did in Melbourne.
Today Victoria recorded 216 new coronavirus cases with more than 1000 active cases in the state.
It’s in stark contrast to less than a month ago, June 14, when Victoria Premier Daniel Andrews announced the state would be easing more restrictions with only nine new cases that day.
But in just a few short weeks that number skyrocketed, with clusters forming after several large family gatherings and an virus outbreak among security guards working in Melbourne’s quarantine hotels.
Allegations have since emerged that guards were sleeping with guests, not using proper personal protective equipment and allowing them to leave quarantine.
The outbreak quickly spread through Melbourne suburbs, with clusters forming in several schools and northern public housing blocks.
In response Mr Andrews announced the city and nearby Mitchell Shire would be going into lockdown for six weeks from Thursday to try and contain the spread.