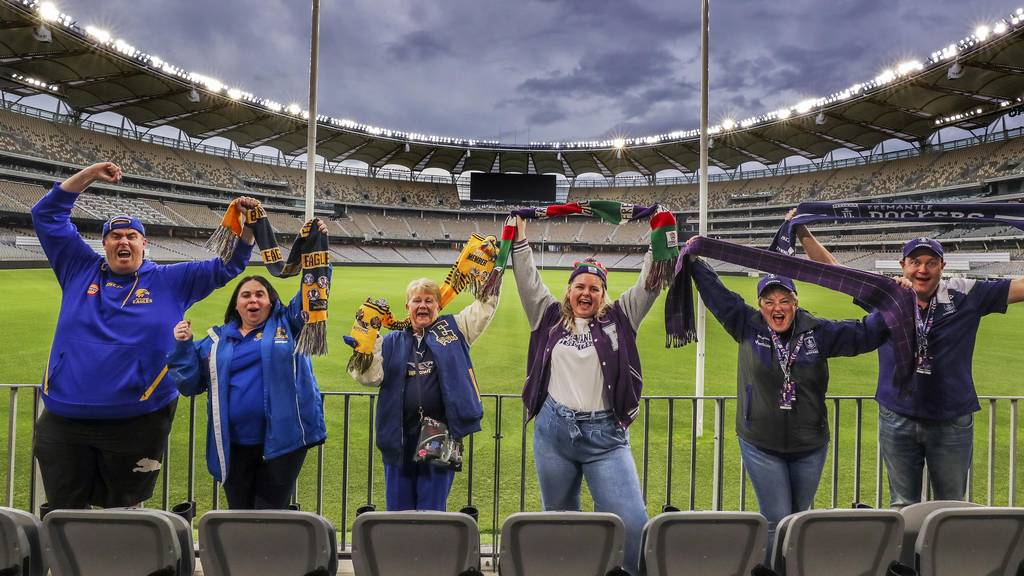 Fremantle have confirmed they will provide updated information on derby ticket sales this afternoon after the state government announced the move to Phase 5 of the coronavirus roadmap has been postponed.
The decision means a highly-anticipated full house of 60,000 fans wont be present at the sole western derby in 2020, with the crowd capped at 30,000 under the Phase 4 guidelines.
Ticket sales were suspended on Tuesday morning after 30,000 were sold on day one of ticket sales (Monday) alone.
Analysis: Derby cap sends right message, but is it practical?
SIGN THE PETITION TO BRING THE GF TO OPTUS HERE!
Don’t miss the latest sports news!
$13$7per week for 12 weeks* (Digital + Print)
Enjoy unlimited access to thewest.com.au and everyday digital editions on any device.
Thursday – Monday papers home delivered with all of the latest footy news!
SUBSCRIBE NOW
Elite Sheppard in league of his own in 2020
Under the previous plan, Collingwood vs Geelong was set to be played in front of 30,000 fans this Thursday night, with Phase 5 being entered on Saturday July 18 ahead of Sundays derby.
However with the postponement of Phase 5, it means only half of the anticipated capacity can attend the blockbuster match.
Today’s announcement confirms next weekend’s game will hold the smallest crowd in western derby history, surpassing the 32,680 for Derby IX in 1999.
Given the number of people in hotel quarantine, and with the situation in Victoria worsening, there is an increased risk of the virus spreading, Premier Mark McGowan said.
As a result, our chief health officer has recommended a delay in the introduction of Phase 5. We have accepted that advice.
We’ve decided to be extra cautious here.
Camera Icon
Eagles fan Dan English and Dockers fan Tay Kaka, pictured with (L-R) Bec Lauchlan, Frank Lauchlan, Tess Dickson and Jim Versluis. Credit: Danella Bevis/The West Australian
The new tentative date for Phase 5 is Saturday August 1st.
The Premier said the fallout for ticketing would largely need to be sorted out by the football clubs, but insisted the government would offer assistance where possible.
While describing the situation in Victoria as “diabolical”, Mr. McGowan said the decision was made to protect the people of WA.
“I realise this won’t be popular with some people,” he said.
“I understand in particular around the Eagles – Dockers game there will be some problems.
“But we’re doing this for the right reasons.”
Mr McGowan said the inconvenience was a “small price to pay” to protect people’s health.
When asked what the difference was between a crowd of 60,000 and 30,000, Mr McGowan said it clearly reduced the risk for a major sporting event.
Its clearly a smaller risk than before, it allows for social distancing and better isolation between people and it reflects our current risk profile, he said.
It wont be a happy day for Fremantle and Eagles supporters but were just doing our best to manage a health problem.
Hurn tips fired up Nic Nat after OBrien tweet
For the crowd that is going there will be much greater public transport provision than would normally be provided for a crowd of this size.
The Premier said the hard border with the rest of the nation would be up for as long as it takes.
He said WA was a sovereign state of 2.6 million people which powered the nation and would bring the border down when it was the right time.
Camera Icon
A general view of play during the round 1 AFL match. Credit: Paul Kane/via AFL Photos
Today it would be fair to say WA is not giving in to requests for us to bring down the border, said Mr McGowan.
With the match confirmed as a Dockers home game, the club is expected to communicate ticketing information to members this afternoon.
The decision to delay the next step of the pandemic recovery roadmap comes due to the second wave crisis unfolding in Victoria, where 288 new cases have been recorded in the past 24 hours.