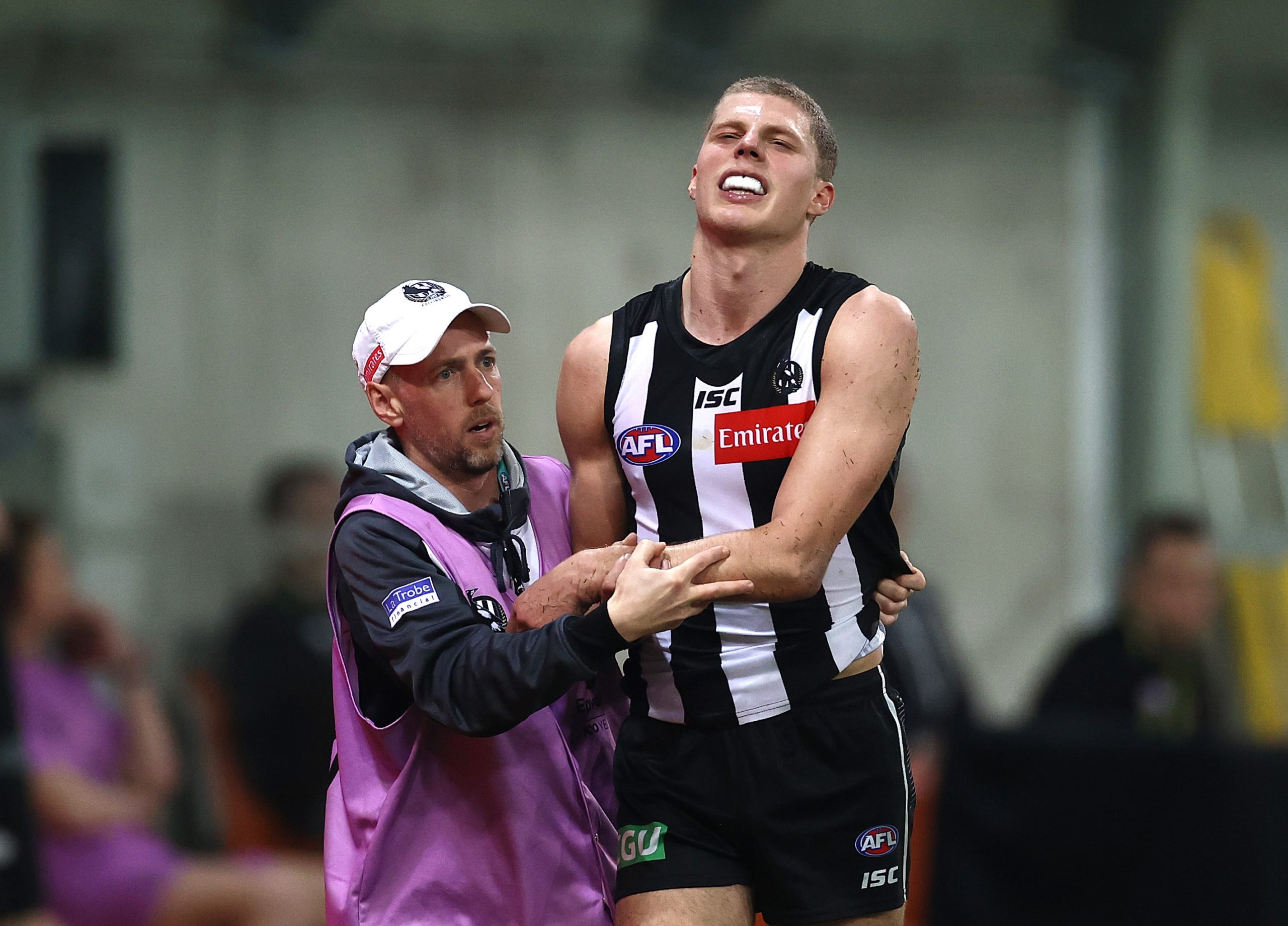 COLLINGWOOD forward Will Kelly will undergo scans on Saturday morning to rule out a fractured elbow that marred an otherwise promising debut.
Kelly landed awkwardly from a marking contest in the final quarter of the Magpies’ 32-point defeat of Hawthorn at Giants Stadium on Friday night.
>> WATCH THE INCIDENT IN THE PLAYER ABOVE
Coach Nathan Buckley said post-match the 19-year-old’s early diagnosis was a dislocated left elbow and club medicos were hopeful he had avoided further damage.
“It’s a tough game. It is bittersweet. He looked like he was enjoying himself and he was a part of a solid team performance,” Buckley told reporters.
“We don’t know if we can rule out a fracture at this point but it seems like he might have escaped that.
MAGPIES FLEX THEIR MUSCLES Full match coverage and stats
“We’ll get a scan tomorrow morning, then we plan to fly him over to Perth (where Collingwood plays next week) and get whatever assistance we need over there.”
Buckley was thrilled with his side’s improved work in the contest, where Adam Treloar, Taylor Adams, Rupert Wills and Jamie Elliott dined out, as Collingwood snapped its two-game losing skid.
However, with the threat of a truncated fixture hanging over all clubs’ heads, Buckley reluctantly went into preservation mode after being six goals clear at three-quarter time.
Elliott (shin) didn’t play from midway through the third quarter, while defender Matt Scharenberg copped a Ben McEvoy knee to his ribs late in the game.
“Jamie could have kept playing and he was a little bit frustrated by the call but maybe there’s more of that (medium-term) mentality,” Buckley said.
“I don’t know whether it’s the right decision myself. It’s the right decision, because Jamie will be upright and all right for next week but when that comes about and you’re six goals up at three-quarter time you want to make sure you look after your better players.
“I don’t know how comfortable I am with that sort of situation or making those calls but potentially it’s the most prudent.”
The Magpies move back into the top four at least the meantime but Alastair Clarkson’s Hawks have lost two straight and kicked only two goals to the final break.
Clarkson remained defiant afterwards, pointing to the fact they had already played five of the top six teams from last season.
“We’re realistic about where we sit as a footy club. We’ve played five of the best six teams in last year’s season and we’re 3-3,” he said.
“We’d like to be better than that but 3-3 still has us alive in the season. We had a particularly tough last 10 days, in terms of what we’ve had to do as a footy club.
“You get out of the state, our whole club, in the space of two days to play a game in Sydney against an opponent that’s just sitting here waiting for you on their home track, in GWS, and then we have to butter up five days later against a really good side.”
WATCH Big Hawk in tears after suffering hamstring injury
Clarkson was pleased with “some elements” of Friday night’s performance but said his players would need to improve on what they dished up in the past fortnight.
“There will be some point in time in this season where we get a bit luckier run than what we’ve had in the last seven or eight days,” he said.
“But every club is going to have to go through this. We’ve gone through a tough patch ourselves, we’re 3-3, and we’ve got a chance now to take stock a little bit.”