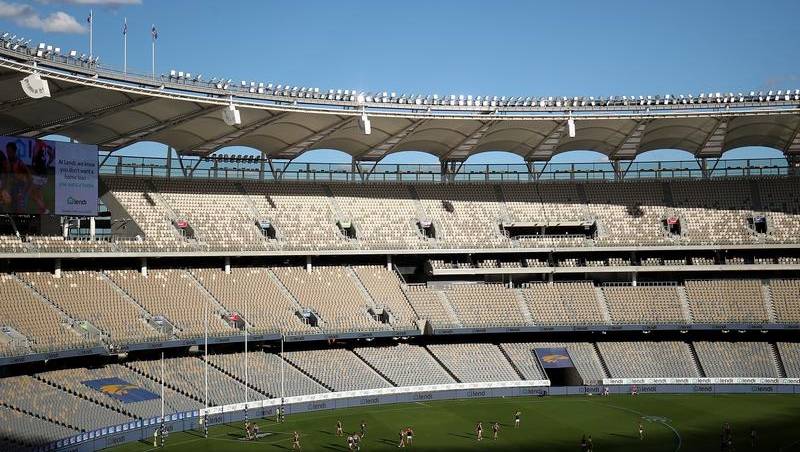 Western Australia will delay easing its final COVID-19 restrictions by at least two weeks as it monitors the outbreak in Victoria, while most people in hotel quarantine will soon be forced to pay for their accommodation.
Phase five was scheduled to begin on July 18, removing all remaining limits on gatherings and allowing crowds of 60,000 at Optus Stadium.
But the situation in Victoria has raised concerns, despite WA retaining its interstate border closure and not recording a community-based infection since mid-April.
Premier Mark McGowan said August 1 had been tentatively set as the new date for phase five, and a final decision would be made in the next couple of weeks.
Mr McGowan said he understood the decision would have a knock-on effect for some events and businesses, but warned he did not want to have to reimpose restrictions.
“I wish we could move to the next phase, I really do,” he told reporters on Friday.
“I just don’t want all our work to go to waste.”
The delay means the July 19 AFL derby between West Coast and Fremantle will be capped at 30,000 people.
From July 17, all international arrivals will be required to pay for their 14 days of hotel quarantine, with that to be built into legislation when state parliament resumes in August.
“There will be some exemptions from paying for extreme hardship,” Mr McGowan said.
Health Minister Roger Cook said there were three new coronavirus cases recorded in WA overnight and all were in hotel quarantine, including one who arrived from the Congo.
The other two cases are from the same July 1 flight that arrived from Dubai, which is now connected to 10 of the 19 active cases in WA.
Four of the active cases are from interstate.
WA’s Chief Health Officer Andrew Robertson said it was unlikely Victoria had seen the peak of its outbreak, which could take at least two months to get under control.
Mr McGowan said in the past 10 days, WA had 4995 interstate travellers arrive by air, including 414 people from Melbourne in the past two days.
Police Commissioner Chris Dawson flagged all planes from Victoria could be stopped from coming into WA in a bid to keep COVID-19 out of the state.
Under new rules for international travellers, only 525 people will be allowed to arrive in WA every week.
Mr McGowan also reiterated the state’s border would remain closed for “as long as it takes”.
“WA is not giving in to requests for us to bring down the border,” he said.
“We are a sovereign state of 2.6 million people, who carry a lot of the economic load of this country, and we’ll make the decision on when to bring the border down when the right time is there – and it’s not now.”
Australian Associated Press