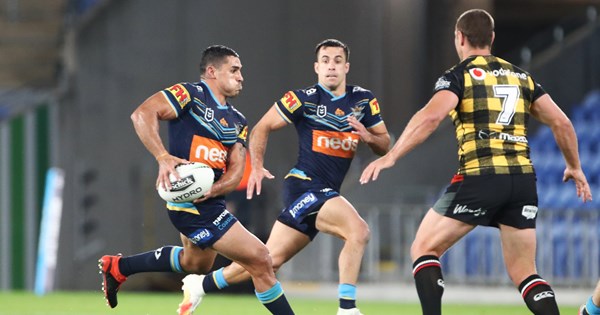 The Titans ended a 10-game losing streak at Cbus Super Stadium by stunning the Warriors 16-12 courtesy of a late try to rookie Beau Fermor.
The Gold Coast had trailed 12-0 early and looked set for a heavy defeat with diabolical handling costing them dearly in the first half.
On the back of defenive resilience and a brave performance by second-rower Keegan Hipgrave, who played the majority of the match with an injured shoulder,  they fought back.
Fermor, who played in the unfamiliar position of centre, scored the match-winner in the 74th minute after chasing a Jamal Fogarty grubber.
Earlier, interim Warriors coach Todd Payten revealed that trio Ken Maumalo, David Fusitu’a and Agnatius Paasi were set to return to New Zealand after the clash with Cronulla next week.
They have not been able to get their respective families to Australia due to  COVID-19 travel restrictions after the squad had relocated to Australia in May.
Payten said the trio had the club’s blessing to head home on compassionate grounds.
“I think the lads