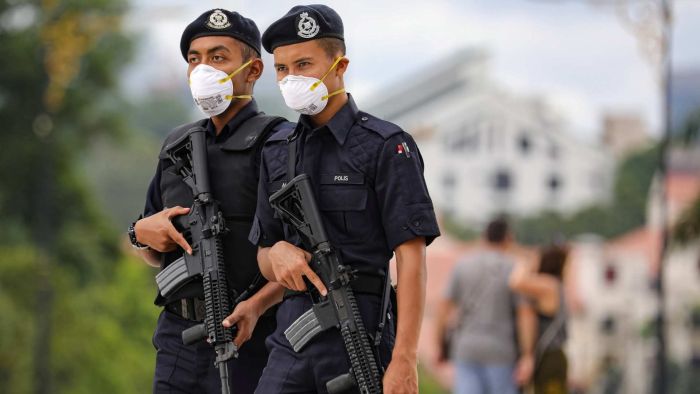 A group of six journalists, including five Australians, should learn within days if they will be charged over a story which has angered Malaysian authorities.
Key points:

Human rights groups say a Malaysian police investigation of the Al Jazeera journalists is a chilling example of diminishing press freedom in the country.
The journalists were questioned by police in Kuala Lumpur on Friday and are facing possible charges of sedition and defamation.
Both offences carry possible jail terms.
Authorities are also investigating whether the group has violated Malaysia’s Communications and Multimedia Act.
The journalists work for Al Jazeera’s 101 East television program, which last week reported on the plight of undocumented migrant workers during the coronavirus pandemic.
Its documentary, Locked Up in Malaysia’s Lockdown, showed the migrant workers being arrested during raids under tight lockdowns.
The Malaysian Government was angered by the report, labelling it misleading, inaccurate and unfair.
Defence Minister Ismail Sabri Yaakob called on Al Jazeera to apologise to Malaysians.
He said the allegations of racism and discrimination against undocumented migrants broadcast by the program were untrue.
Al Jazeera has strongly rejected the allegations and has called on Malaysia to withdraw the criminal investigation.
“Charging journalists for doing their jobs is not the action of a democracy that values free speech,” Al Jazeera said in a statement.
“Journalism is not a crime.”
Al Jazeera said its repeated requests for government interviews were not accepted.
“Al Jazeera also sought to attend the Defence Minister’s press conferences, but were told only state media could attend,” the news network said.
National police chief Abdul Hamid Bador told reporters in Kuala Lumpur on Friday the Attorney-General’s office would decide on any further action against the Al Jazeera staff.
“They are coming in as witnesses, not suspects,” he said, before indicating the Attorney-General would decide “in a matter of days” whether there is a case against the journalists.
Malaysia’s immigration department has also issued a search notice for a Bangladeshi national interviewed in the documentary.
Concerns over press freedom, free speech
Human rights groups have raised concerns over crackdowns on media freedom under Prime Minister Muhyiddin Yassin’s government, which came to power in March.
They say there is also growing anger toward foreigners, who have been accused of spreading the novel coronavirus and being a burden on state resources.
Prime Minister Muhyiddin Yassin came to power in March.(AP: John Shen Lee)
The investigation of Al Jazeera journalists is the latest in a string of incidents in the past few weeks where people have been called in for questioning about reporting or public statements.
A South China Morning Post correspondent has also been questioned about her reporting of migrant workers.
A refugee activist was also called in to be questioned about a Facebook post on the treatment of migrants and refugees.
Phil Robertson, the deputy director of Human Rights Watch’s Asian division, told the ABC the situation the Al Jazeera journalists are facing is “astounding and shocking”.
“It is a real sense of returning to the past, this is the sort of thing we saw against journalists in the last days of prime minister Najib’s government in Malaysia where the government was lashing out at any sort of critics, whether they be citizens or journalists doing their job like these folks,” he told the ABC.
“We’re seeing now more and more intolerance for critical opinions, violations of freedom of expression in Malaysia.
“You get the sense that Malaysia’s really in a time warp going back to a rights-abusing past.
“We’re very concerned about these six journalists, we think that the Government should not press any charges.”
The Australian Government says it is providing consular assistance to the Australians in Malaysia.
Al Jazeera said its staff and those interviewed in the documentary had faced abuse, death threats and the disclosure of their personal details on social media.
The police chief said the journalists would be safe, and any threats should be reported.
Mr Robertson said the situation was deeply concerning.
“They are trying to make an example of Al Jazeera as a cautionary tale to any other journalist who may take on topics that the Government doesn’t like,” he said.
“I think that it’s a very, very serious situation but also I think there’s a bit of gamesmanship going on here where the Government of Malaysia is trying to express its outrage, it’s trying to get people who are in Malaysia, who are suffering badly, to identify with the other, the migrant workers some sort of hidden enemy as a unification process.
“It’s a very cynical ploy by a government which has not yet demonstrated its majority in parliament.”
ABC/wires