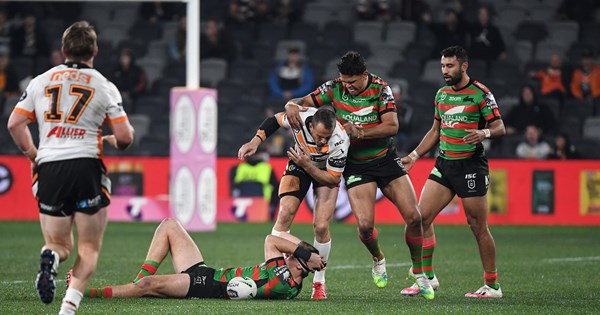 A return to the cardinal and myrtle No.1 jumper he wanted to make his own looms for Alex Johnston as Latrell Mitchell faces a nervous wait and the Rabbitohs count the cost of their hard-fought 18-10 win over Wests Tigers.
Mitchell was placed on report for a high shot on Luke Garner as the Tigers mounted a late fightback and may also have to answer over a swinging arm on Josh Reynolds off-the-ball in the opening minutes.
The South Sydney star took issue with Reynolds kicking wildly at a ball and collecting teammate Campbell Graham in the head, with Mitchell then running in and hitting the Tigers five-eighth on the chin.
Souths play Newcastle next Saturday night and are already expected to be without prop Liam Knight after he suffered a sprained ankle during the warm-up.
Match Highlights: Rabbitohs v Wests Tigers
Johnston has been told there will be no room for him at his junior club in 2021 after being touted for the fullback role often throughout his career, but he shapes as the obvious replacement should Mitchell be rubbed out.
Coach Wayne Bennett said he did not notice Mitchell’s first incident involving Reynolds as he was concerned for Graham’s welfare, and is hopeful Mitchell could escape suspension for his tackle on Garner.
Bennett: Diagnosis not as bad as first thought on Knight
“I didn’t take a lot of notice of what happened after