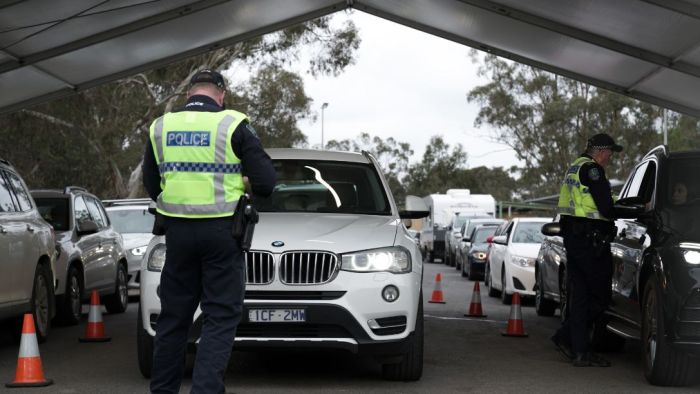 Hundreds of travellers have made a last-minute dash from Victoria into South Australia before a hard border closure came into effect overnight, including Melbourne residents seeking to escape their city’s coronavirus lockdown.
Key points:

A line of about 150 cars was queued at the Bordertown checkpoint in SA’s South East late yesterday, with incoming travellers expressing mixed feelings, including confusion and relief.
“We live in Melbourne now, but we’d like to get back to South Australia so we can avoid the lockdown and feel a bit safer about where we are,” one traveller said as she waited at the checkpoint with her family.
“We’ve got a full car of everything we’ve left the dog behind sadly, but the rest of us have come back.”
Another South Australian local who had been in Victoria told the ABC she “just thought ‘we’ve got to get out of here’, so we literally just got in the car, packed up and came home”.
SA Police officers speak with drivers at a Bordertown checkpoint.(ABC News: Michael Clements)
SA Police announced the imminent closure of the border with Victoria earlier this week, with the SA Government citing the eastern state’s “clear threat” to public health.
The new restriction came into effect at midnight.
Coronavirus live news: Follow all the latest information in our blog.
Only residents returning to South Australia or those granted a special exemption will now be allowed to pass through checkpoints along the border.
Anyone returning will still be required to self-isolate for 14 days, while Victorian residents attempting to cross will be turned away, unless they are essential travellers and abide by strict conditions.
Cars lined up at a border checkpoint at Bordertown.(ABC News: Michael Clements)
While many travellers at the border were relieved to be heading home, others said they were confused by the pre-approval process that delayed their border crossings.
“We didn’t really anticipate it was going to take so long to get through the line,” South Australian resident Christina Rugari said.
“We weren’t really aware we had to do a pre-approval application and then the police officer told us we had to come out here with no reception and try and fill one out online.
“[We had] to go all the way back through the queue and come through again.”
An SA Police officer speaks to a driver passing through a checkpoint in Renmark.(ABC News: Samantha Dawes)
More than 23,000 people living in Victorian border towns have applied for exemptions allowing them to enter South Australia, with a major backlog in processing the applications.
People living in those locations will only be allowed to travel 50 kilometres into South Australia, SA Police has confirmed.
Commissioner Grant Stevens yesterday said the limit was necessary to allow for locals to continue with their daily routines at the same time as keeping communities safe.
“That will enable them to undertake those services or functions that they require as part of their daily lives, but will prevent them from travelling too far into South Australia and provide us with greater security in relation to their movements,” he said.
Police have previously said they would consider calling in the Defence Force to strengthen checkpoints along SA’s eastern border.
What you need to know about coronavirus: