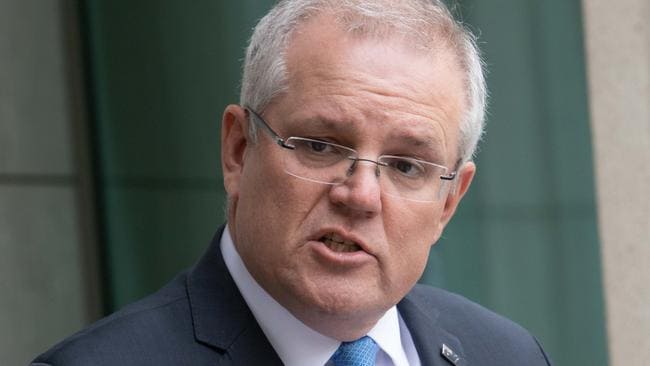 The Federal Government has updated their travel advice for Hong Kong, saying Australians should continue not to travel and may be at risk of detention if they stay.Addressing the nation on Thursday afternoon, Prime Minister Scott Morrison said the amendment to the language used in the travel advisory was “issued in respect to our extradition agreement with Hong Kong” and in response to the risks from the national security legislation.
“Australia today has taken steps to suspend our extradition agreement,” he said.
“We have formally notified Hong Kong and advised the Chinese authorities. I also note that our travel advice for Hong Kong has been updated, and we’d encourage Australians to refer to that travel advice.”
RELATED: Words that have come back to haunt China
RELATED: China threatens Australia over helping fleeing Hong Kong citizens
Earlier today, the Department of Foreign Affairs and Trade updated the traval advisory that under the new national security legislation for Hong Kong, Australians could be deported or face possible transfer to mainland China for prosecution under mainland law.
“The full extent of the law and how it will be applied is not yet clear,” the announcement read.
“You may be at increased risk of detention on vaguely defined national security grounds. You could break the law without intending to.
“We advise do not travel to Hong Kong.”
The travel advice overseas has been at a level 4 ‘Do Not Travel’ since mid-March.
Mr Morrison announced alongside the travel advice that Australia had formally suspended its extradition agreement with Hong Kong and the Chinese authorities. The Prime Minister said the decision represents an “acknowledgment of the fundamental change of circumstances in relation to Hong Kong”.
“We have formally notified Hong Kong and advised the Chinese authorities,” he said.
“In our view – and this is not just our view, it’s a shared view of many countries – that it undermines the One Country, Two Systems framework, and Hong Kong’s own basic law and the high degree of autonomy guaranteed in the Sino-British Joint Declaration that was set out there.
“That is a matter of public record from Australia’s point of view.”
Mr Morrison said in addition to the extradition suspension, Australia would offer safe haven visas to thousands of Hong Kong residents living here who did not want to return home in the wake of China’s brutal crackdown on pro-democracy protesters.
“Australia today has taken steps to suspend our extradition agreement,” Mr Morrison said.
“We have formally notified Hong Kong and advised the Chinese authorities.”
Mr Morrison said that from today, Australia would adjust the immigration policy settings so that skilled and graduate visa holders would have their visas extended by five years “with a pathway to permanent residency at the end of those five years.”
“That means if you’re a current or future student, you’ll be able to stay for a total of five years once you’ve graduated with a pathway to permanent residency at the end of that period,” he said.
“If you’re a temporary visa holder, your visa will be extended to an additional five years from today, in addition to the time you’ve already been in Australia with a pathway to permanent residency at the end of that period.”
Mr Morrison said a five-year visa with a pathway to permanent residency would also be offered for future Hong Kong applicants for temporary skilled visas.
Hong Kong residents are facing an uncertain future after a new security law imposed by Beijing last month gave authorities sweeping powers to police local users.
Beijing imposed the security legislation on Hong Kong in response to huge and often violent democracy protests that erupted last year.
It targets acts of subversion, secession, terrorism and foreign collusion.
The law’s imposition, which bypassed the territory’s legislature, is the most radical change in its freedoms and autonomy since it was handed over from Britain in 1997.
In response, Britain said it would offer Hong Kong residents a new path to British citizenship, in a move that could affect more than three million people living in the territory.
Beijing’s ambassador to London then accused Britain of “gross interference” in China’s internal affairs and warned that it would “bear the consequences” of treating China as a “hostile country”.
Similar national security laws are used to crack down on dissent in mainland China.
In Hong Kong, police have already arrested people voicing certain political views now deemed illegal, such as advocating independence or greater autonomy.
“This very conversation could put me into legal danger where I could be punishable by life imprisonment,” Brian Leung, a prominent pro-democracy campaigner in Hong Kong, told the panel of British MPs.
Leung is currently studying for a political science PhD at Washington University in Seattle.
“The obvious purpose of this law is to create terror and fear among people not only domestically but also internationally such that people outside of Hong Kong would not speak up.”