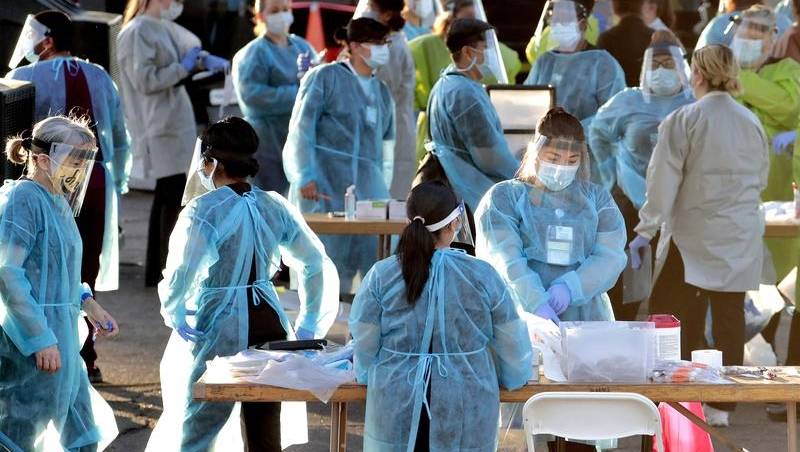 The US coronavirus outbreak has crossed a grim milestone of over three million confirmed cases as more states report record numbers of new infections, and Florida faces an impending shortage of intensive care unit hospital beds.
Authorities have reported alarming upswings of daily caseloads in roughly two dozen states over the past two weeks, a sign that efforts to control transmission of the coronavirus have failed in large swathes of the country.
California, Hawaii, Missouri, Montana, Oklahoma and Texas on Tuesday shattered their previous daily record highs for new cases. About 24 states have also reported disturbingly high infection rates as a percentage of diagnostic tests conducted over the past week.
In Texas alone, the number of hospitalised patients more than doubled in just two weeks.
The trend has driven many more Americans to seek out COVID-19 screenings. The US Department of Health and Human Services said on Tuesday it was adding short-term “surge” testing sites in three metropolitan areas in Florida, Louisiana and Texas.
In Houston, a line of more than 200 cars snaked around the United Memorial Medical Centre as people waited for hours in sweltering heat to get tested.
“I got tested because my younger brother got positive,” said Fred Robles, 32, who spent the night waiting in his car. “There’s so many people that need to get tested, there’s nothing you can do about it.”
In Florida, more than four dozen hospitals across 25 of 67 counties reported their intensive care units had reached full capacity.
Only 17 per cent of the total 6010 adult ICU beds statewide were available on Tuesday, down from 20 per cent three days earlier.
Additional hospitalisations could strain healthcare systems in many areas, leading to an uptick in deaths from the respiratory illness that has killed more than 131,000 Americans to date.
A widely cited mortality model from the University of Washington’s Institute for Health Metrics and Evaluation (IHME) projected on Tuesday that US deaths would reach 208,000 by November 1, with the outbreak expected to gain new momentum heading into autumn.
President Donald Trump, who has pushed for restarting the US economy and urged Americans to return to their normal routines, said on Tuesday he would lean on state governors to open schools in autumn.
Speaking at the White House, Trump said some people wanted to keep schools closed for political reasons. “No way, so we’re very much going to put pressure on governors and everybody else to open the schools.”
New COVID-19 infections are rising in 42 states, based on a Reuters analysis of the past two weeks. By Tuesday afternoon, the number of confirmed US cases had surpassed three million, affecting nearly one of every 100 Americans.
In Arizona, another hot spot, the rate of coronavirus tests coming back positive rose to 26 per cent for the week ended July 5, leading two dozen states with positivity rates exceeding 5 per cent. The World Heath Organisation considers a rate over 5 per cent to be troubling.
The surge has forced authorities to backpedal on moves to reopen businesses, such as restaurants and bars, after mandatory lockdowns in March and April reduced economic activity to a virtual standstill and put millions of Americans out of work.
Australian Associated Press