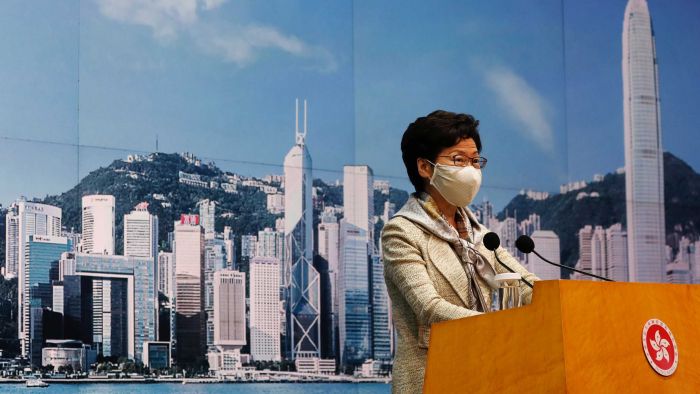 Hong Kong’s new national security law imposed by Beijing last week does not spell “doom and gloom” for the city, according to its leader Carrie Lam.

The sweeping legislation punishes, with up to life in prison, what China describes broadly as secession, subversion, terrorism and collusion with foreign forces.
“Surely this is not doom and gloom for Hong Kong,” Ms Lam said.
“I’m sure with the passage of time, and efforts and facts are being laid out, confidence will grow in one country, two systems and in Hong Kong’s future.”
The law came into force at the same time it was made public on Tuesday June 30.
Police arrested about 10 people for related offences the next day.
The law has been criticised for undermining freedoms guaranteed under the “one country, two systems” agreement.(AP: Vincent Yu)
Ms Lam said the law would restore Hong Kong’s status as one of the safest cities in the world following sometimes violent pro-democracy protests last year.
“Compared with the national security laws of other countries, it is a rather mild law,” Ms Lam said.
“Its scope is not as broad as that in other countries and even China.”
The legislation has been criticised by countries such as Britain and the United States and by human rights groups.
They say it undermines freedoms guaranteed under the one country, two systems framework agreed to as part of the former British colony’s return to Chinese rule in 1997.
And the law gives mainland Chinese security agencies an enforcement presence in Hong Kong for the first time.
Ms Lam said cases involving the new mainland agency in Hong Kong would be “rare” and national security was a “red line” that should not be crossed.
In addition to local police, mainland Chinese security agencies now have an enforcement presence in Hong Kong.(Reuters: Tyrone Siu)
Ms Lam promised to allow reporters to work freely in the city if they vowed not to breach the new law.
‘If all reporters in Hong Kong can give me 100 per cent guarantee that they will not commit any offences under this piece of national legislation, then I can do the same,” Ms Lam said.
“But the law has clearly defined the four types of acts and activities which we need to prevent and curb and punish in accordance with the law.
“So that’s my response to the reporters.”
Hong Kong released additional details about the law on Monday, revealing security forces had overriding authority to enter and search properties for evidence and stop people from leaving the city.
Reuters