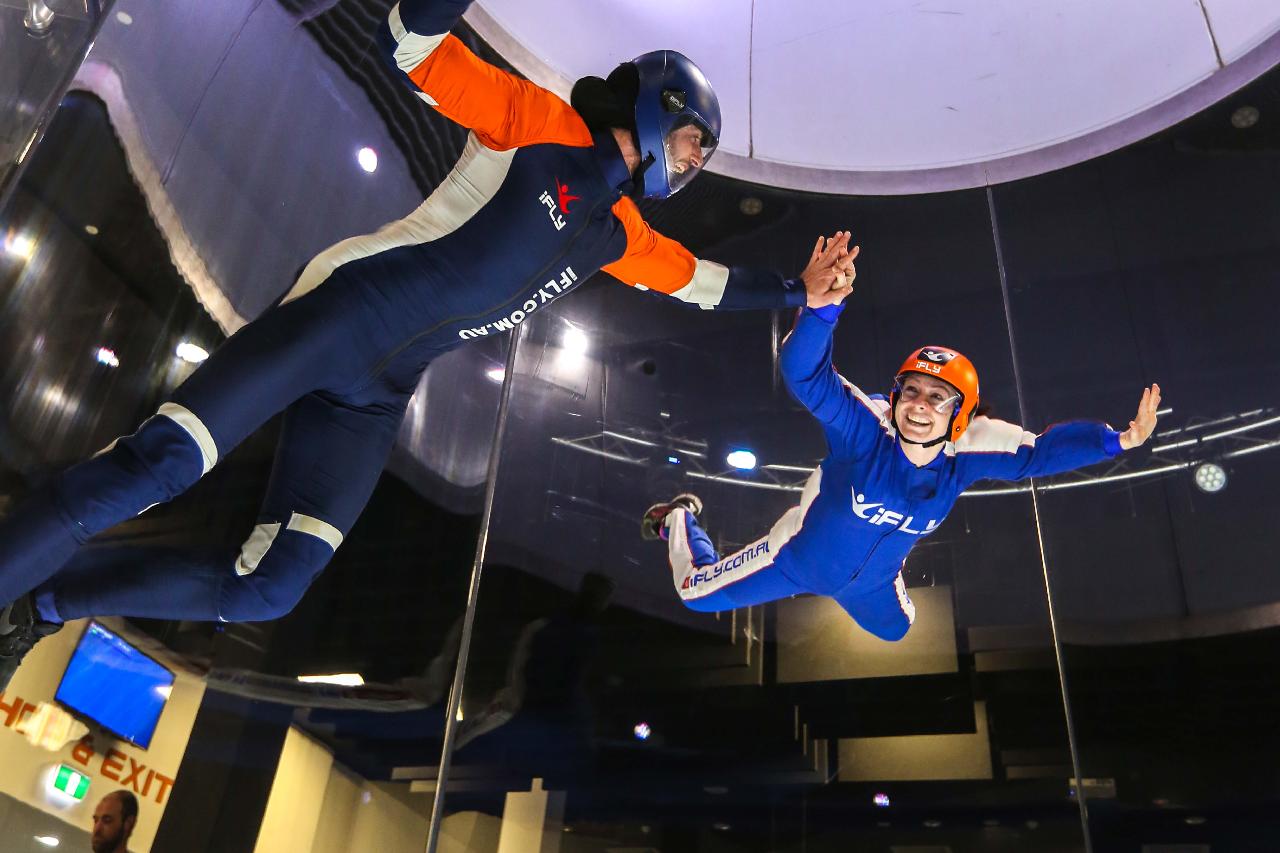 Have you always wanted to skydive but you’re scared of heights? Then indoor skydiving is for you.

When I was a kid and would dream of having a superpower, it wasn’t invisibility or teleportation, it was always flying. Funny then that I’m so petrified of heights that even the thought of skydiving leaves me sweating and shaking. So when I recently heard about iFLY Downunder, I was excited that at long last a childhood dream could be fulfilled. Finally, it was time to fly.

If you’ve not heard of iFLY, it’s an indoor skydiving simulator where the simulation of freefall is created by fans generating extreme upward winds. Entering the wind tunnel, you are cushioned by a column of air allowing you stay suspended in place or, with a bit of practice, try a few rolls and spins.

Although there are similarities to actual skydiving, this activity is very different.

Instead of jumping from a plane and falling thousands of feet to an often rough landing, here it begins with a gentle lift off. There’s no bad weather to worry about, no need to have an instructor attached to your back and best of all no parachute to risk getting stuck in a powerline.

Which brings me to the biggest difference. Safety. The likelihood of injury is extremely minimal, which is why the let anyone from the age of 3 up can have a go. 3! That’s an age that you’re not even trusted to wipe your own butt properly, but you’re allowed to indoor skydive!

iFLY have locations around Australia, but the closest to us is in Sydney, located next to Penrith Panthers (which made it very convenient to celebrate my newly acquired superpower with a couple of coldies). The Penrith facility can also lay claim to being the largest and most powerful indoor skydiving facility in the Southern Hemisphere.

So back to the flight. It’s a simple process right from the start with self check in. Then on to a quick orientation, watch a video, listen to some simple instructions, gear up. Flight suit, helmet and glasses donned, I’m ready to go.

The activity is done in small groups, with each flyer getting to go twice for around 1 minute each time. It’s funny how a minute can seem both exceptionally long and way too quick at the same time!

The first time in the tunnel was spent trying to maintain a stable body position as I was buffered around by the super strong winds. By the second time I managed moving back and forth, up and down and even pulled off a somersault. Okay, the somersault was unintentional…

In between turns you wait outside the tunnel as the other participants have a go. I still can’t decide what brought a bigger smile to my face, the exhilarating feeling of flying, or sitting on the sidelines watching my husband struggle to rise up in the air. This is where I should point out that you are weighed before you start as depending on how heavy you are is how high they have to turn on the fan. After my husband failed to achieve lift off a few times they adjusted the intensity and he was soon soaring. But it had been such a hilarious sight watching him fumble around that I suspect it’s a trick the wind operator often plays. And it wasn’t just his antics that kept me amused. Watching many of the participants felt like I was watching a Monty Python skit. Flying circus, you bet.

I recommend indoor skydiving to everyone. It’s a thrilling and fun experience. I even more encourage you to convince your friends and family to have a go. And have a good laugh at their expense.