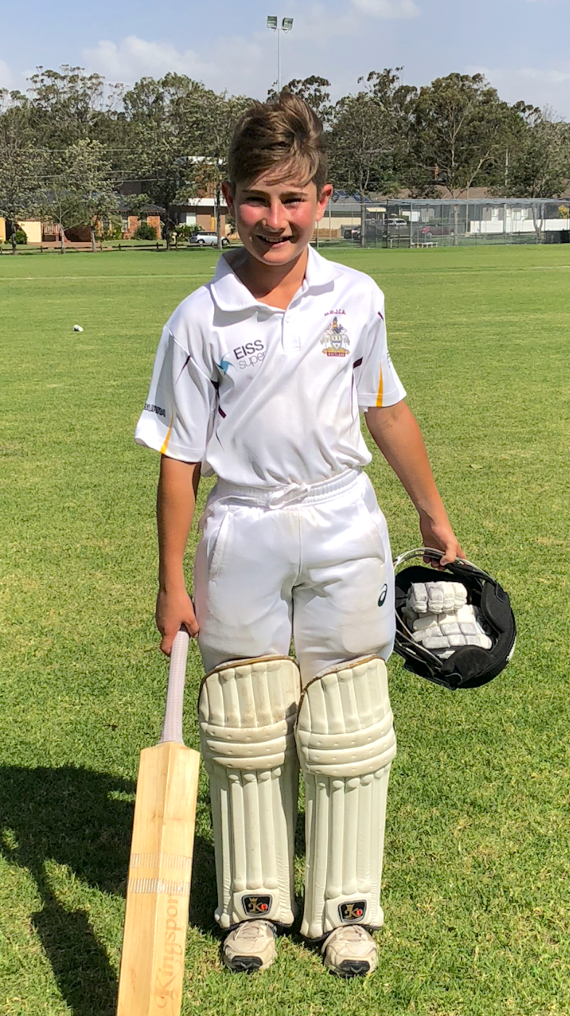 Muswellbrook local and cricket young gun Harry Scowen has smashed goal after goal on the cricket field as he strives to one day play for Australia.

At just 13-years-old Harry has already proven to be a top competitor on and off the cricket field. Training for hours on end at any chance he gets, the young star has been selected to captain the Hunter PSSA Primary Boys Cricket team for the NSW Schoolboy championships and won the Maitland Representative Player of the year award last year.

Most recently Harrywasselected to represent Central North at the Kookaburra Cup held early January, a huge achievement with Central North zone running inland from the Queensland border down to Newcastle. Unfortunately, the tournament was cancelled due to conditions caused by recent bushfires.

Harry started playing cricket at 9-years-old after watching a friend from school play his Saturday morning match and decided that cricket was the game for him. “I asked Mum and Dad if I could sign up for next season and I started watching batsmen on You Tube to learn as much about technique as possible,” Harry said.

Now in year 7 at Muswellbrook High School, Harry lives on his family’s farm just outside of Aberdeen with his dad Luke, his mum Janette and his older brother Tom. He helps family out on the farm to pursue his cricket dream. “I have to help out on the farm if I’m to play cricket,” said Harry.

“Most of Mum and Dad’s time is taken up driving me all over the place for cricket so if I didn’t help out on the farm, they wouldn’t have time to get me places.”

Living on a property has been an advantage to Harry’s form, having the space to train and develop. “One day I’d love to put a pitch in the backyard with a net and power, I could spend hours out with the bowling machine,” Harry said passionately.

The all-rounder’s love for the game grows each year, now in his fifth season of playing cricket. Throughout his young career, Harry discovered a love for wicket keeping as well as batting, and is now working on improving his keeping skills for future seasons.

Inspired by the likes of professional cricketer Virat Kohli, Harry aspires to have his same mental toughness and skill with the bat, but also says his dad is a huge inspiration. “He is always helping me to improve my game and spends hours training at the nets with me,” said Harry.

“A lot of people have helped and supported me along the way so far and I thank my Muswellbrook and Maitland coaches for their support.”

“You meet some pretty good people playing cricket and I’ve only been playing for 5 years, but I have made some really great mates and mentors already.”

Constantly setting goals for himself, his 2019 was goal was to reach 1000 runs which he smashed out of the park with 1009 runs for the season. He now hopes to score a century, or 100 runs, in a single innings and one day play cricket for his state and country. No doubt we will see the name Harry Scowen in Aussie cricket in years to come.