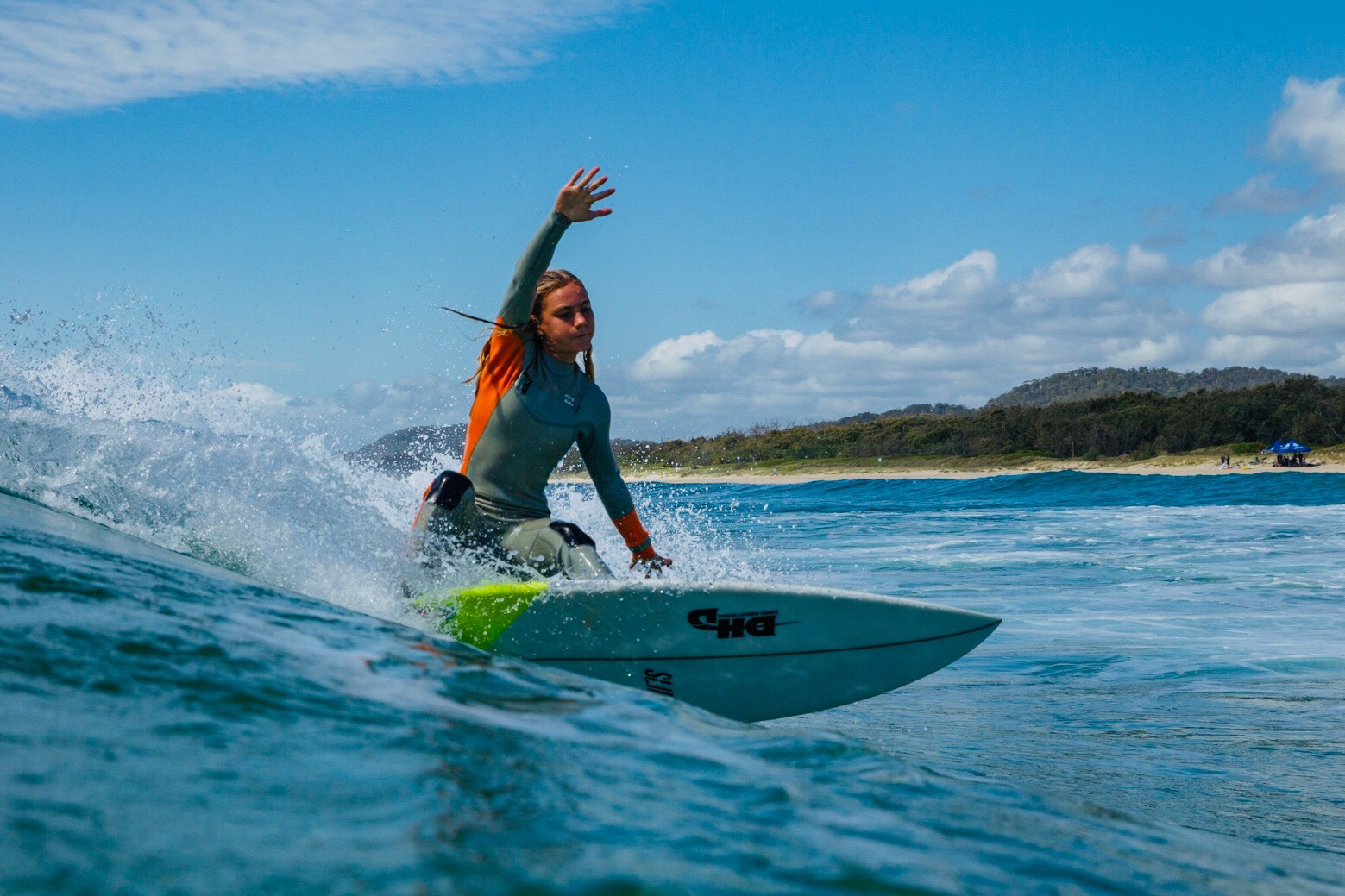 Ellie Lambkin is a 16-year-old surfing young gun, passionate sportswoman and sun, surf and sand lover and she’s making waves in the world of surfing.

Merewether local Ellie Lambkin grew up around our beautiful Newcastle beaches and now takes advantage of having the ocean at her doorstep, hitting the waves whenever surf’s up.

Heading to the South Coast each Christmas holidays with her family, Ellie learnt to surf at the age of 7. Ellie and her sister received a beginner foam surfboard each for Christmas a few years later and as she puts it, “I was hooked from then on.”

Ellie received her first fiberglass board at the age of 12 and started hitting the water every single day. Living close to the water, she would ride her bike down to the beach every morning before and after school for a surf. This began the start of Ellie’s career as she transitioned into serious surfing and competition.

When she’s not in the water Ellie loves sports, school and walking her dogs, not to mention her love for food! The sports star excelled in touch football, oztag, long distance running and soccer but soon found surfing was her calling.

Ellie took home her first win in the Port Stephens Wildcard trials, resulting in free entry to the Surfest Sanbah Cadet Cup where she went on to place 4th. From there the passionate athlete had a final finish 2 years in a row in the Open Women’s of the King of The Box, Port Stephens.

It doesn’t end there, with Ellie coming 3rdin regionals, 2ndin the Youth Slash & Bash, reaching state titles for the school’s all-star event, enjoying a semifinal finish in the Ripcurl Gromsearch in Victoria and multiple quarter final finishes in Billabong and Ripcurl comps. Ellie has also taken home a few open women’s board rider’s events. “Another achievement for me is not getting smashed on the reef while surfing in Samoa as it was so heavy there!” said Ellie.

Inspired by the likes of champion Merewether surfer Philippa Anderson, Ellie aims to also make a career out of surfing, hoping to make the world tour. “She not only helps me develop in my surfing skills but inspires me along with many other girls to never give up no matter what,” said Ellie.

“Whenever she is home from competing on the QS (qualifying series) she is always helping everyone out. Philippa has been on the QS for many years now and a few years ago she was two spots off qualifying for the world tour.”

“She is still striving to get there which I find is extremely inspiring and she’s the biggest legend,” Ellie added.

November saw Ellie compete in the Coffs Harbour Billabong Parko Grom Stomp and her local comp the Mattara Surf Classic at Bar Beach, with comps every weekend for the next few months. “I’m so lucky to have such supportive parents to take me to all these comps,” said Ellie.

Sponsored by Slimes Boardstore and Foam Riders, Ellie has goals of making it to the Ripcurl National Final this year but says “My main goal is just to keep enjoying my surfing!”