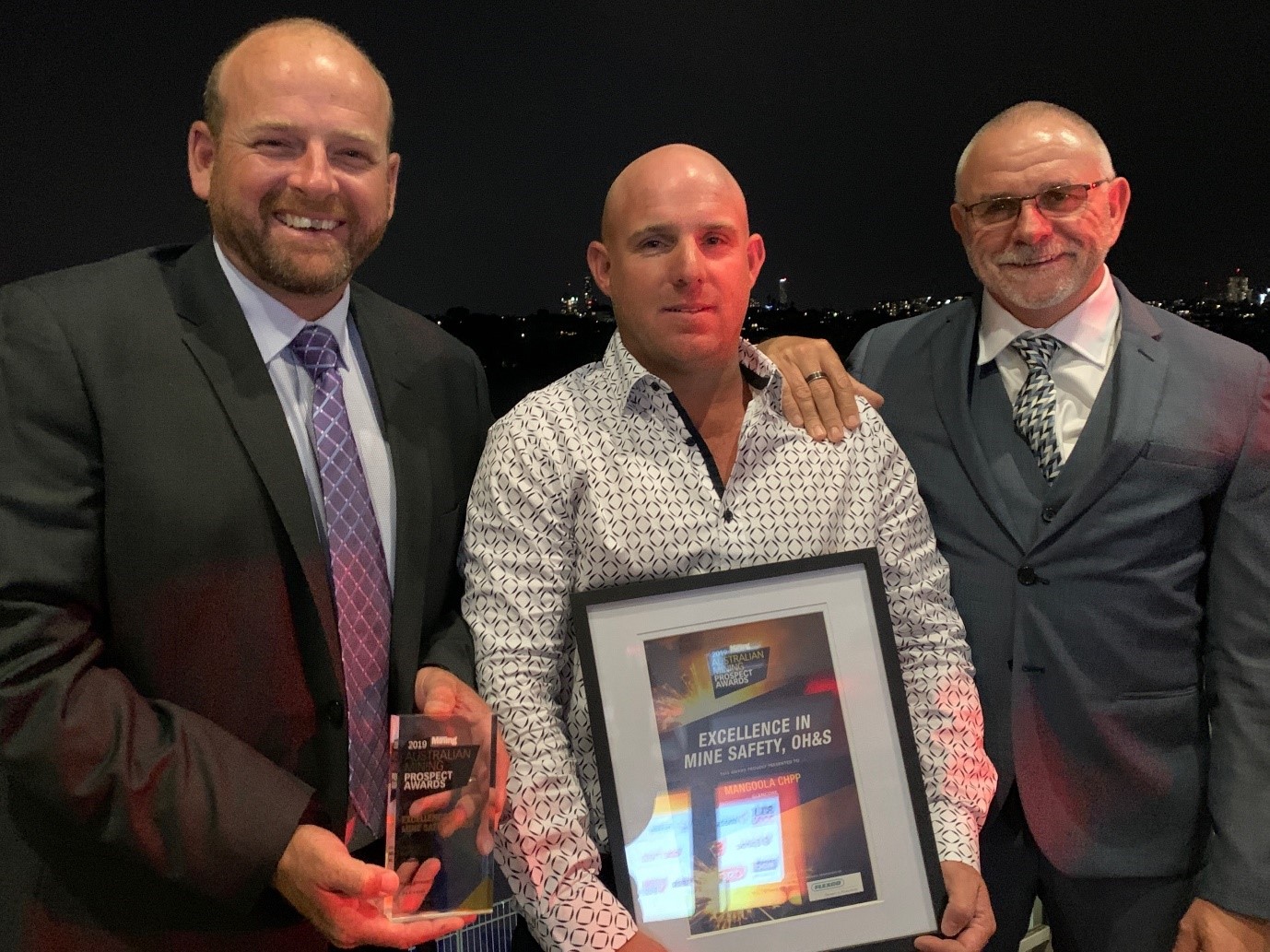 This is the saying proudly displayed on a sign at Glencore’s Mangoola Coal Operations. With the Coal Handling and Preparation Plant (CHPP) taking home three awards at the recent Australian Mining Prospect Awards it’s clearly a saying that they live by.

Since starting operations in 2011, Mangoola has been building a reputation as one of our industry’s top notch coal operations, however the spotlight is normally shone on their exemplary rehabilitation work. The recent wins for Excellence in Occupational Health & Safety, Coal Mine of the Year and Australian Mine of the Year are proof that they are leaders in all areas. We met up with Mangoola CHPP Manager Chris March to find out what it takes to take out not one, not two, but three distinguished awards.

“The thing is we only put our name up for the OHS award,” Chris says. “So to receive the three accolades is simply terrific. It’s great recognition, not just for Mangoola prep plant, but for the whole Mangoola operation. We are just one department and it’s a reflection of the high standards that are set right across the site.”

So how did they end up with three trophies? It all started when Mangoola CHPP were scheduled to conduct a fairly tricky maintenance overhaul procedure replacing chain feeder plates. The chain feeder transfers material from the ROM coal bin to the coal sizer, with top and bottom plates bolted to the main frame of the chain feeder. Historically, replacing these plates is a lengthy task undertaken in restricted spaces and under suspended loads. In 2016, at another mine site, a person had suffered a fatal crush injury whilst doing this task.

“We knew of the industry fatality and as we too had to tackle the same job, we knew we had to find a safer way to do it. I said to our team – ‘You know what needs to be done, so go to it’ and then I gave them the time and the support to do so,” says Chris.

After 9 months of planning the CHPP team had designed a rail and hydraulic system and implemented it successfully. By using the combination of rail and hydraulics, they were able to take people away from the areas of higher risk as well as significantly reducing the time needed to replace the plates.

The innovation uses a hydraulic, trolley mounted lifting table, travelling on a rail system. It allows old plates to be removed and railed out, and new plates to be railed in and lifted squarely into position without exposing employees to suspended loads.

“From start to finish the job took 36 hours without so much as a scratch on any person,” says Chris proudly. “There were also some unintended benefits that come from it as well. Some of the modifications to the equipment we put back in will allow us to eliminate all hot work the next time we do the job.”

“The credit for this project has to go to Maintenance Supervisor Scott Bannerman. He came up with design, worked with suppliers, oversaw the operations and all whilst going about his day job. It also couldn’t have been done without Downer Maintenance Superintendent Shaun Egan and a willing team of personnel made this project a success.”

Chris said one of the things that he really like about the project is that it’s a great example of solving problems through engineering solutions.

“It’s not a job that is done often and may only occur once every 5 and 7 years. But it’s an onerous job. Onerous jobs lead to shortcuts and that’s when incidents occur. What we’ve demonstrated here is that you can climb all the way up the hierarchy of controls and look for an engineering solution instead of looking at administrative solutions. There are other problems out there like this one where if we commit the time and the money, we can come up with the engineering solution and eliminate all the risks.”

During the job the team recorded the whole process using time lapse photography and using this they decided to put forward an entry for the Prospect Awards. Not only did they get selected as a finalist, but the judges also nominated them for the Coal Mine of the Year category which also included nomination for Australian Mine of the Year.

“On the night we thought we had a shot at the OHS award but weren’t even thinking about the other awards. We were so happy when we got called for the OHS gong. Then we got called out for the Coal Mine of the Year and I was blown away. Then at the end of the night when they called us up for Australian Mine of the Year, I couldn’t believe we were walking away with a trifecta of awards. It was amazing. Though I was running out of things to say by the end of the night,” Chris adds with a grin.

But for the high performing team at Mangoola CHPP there is another achievement that means much more than any trophy. Since commencing operations in 2011 the CHPP team has had not one Lost Time Injury. That’s over 3000 days and counting.

“That is such a significant achievement for any prep plant given the high intensity cycle of maintenance. Every fortnight there is 150 – 200 people working on top of each other with a lot of high-risk work and to not have sustained an injury and only a handful of first aid injuries, it really is an outstanding achievement. It all comes down to the culture here, not only of our people, but the many hundreds of contractors who come in and are treated as part of the team.”

Chris goes on to explain how they ascribe to a leader leader culture and not a leader follower culture and over the last few years have rolled out several initiatives to foster that culture. It’s about encouraging every person to take responsibility and be accountable to keep each other safe.

“We have to look out for each other. We can have all the procedures and policies and standards and codes of practice in the world, but how you execute all those things on the ground and look after each other is the critical part.”

“The job of a leader is to lead people to a better place. Whether that’s a safer place, a more productive place, or simply a place where they feel valued as part of the team. For me personally, driving these leadership initiatives is what I’m most proud of. The people on the frontline are everything to a business and developing their leaderships skills and making sure they are happy and productive will roll back out to everyone. We are blessed with the character of people we have. We’ve won these awards because of them.”

This is the second time that Mangoola has won the Australian Mine of the Year at the Prospect Awards, first taking the title back in 2013. We reckon it won’t be the last.