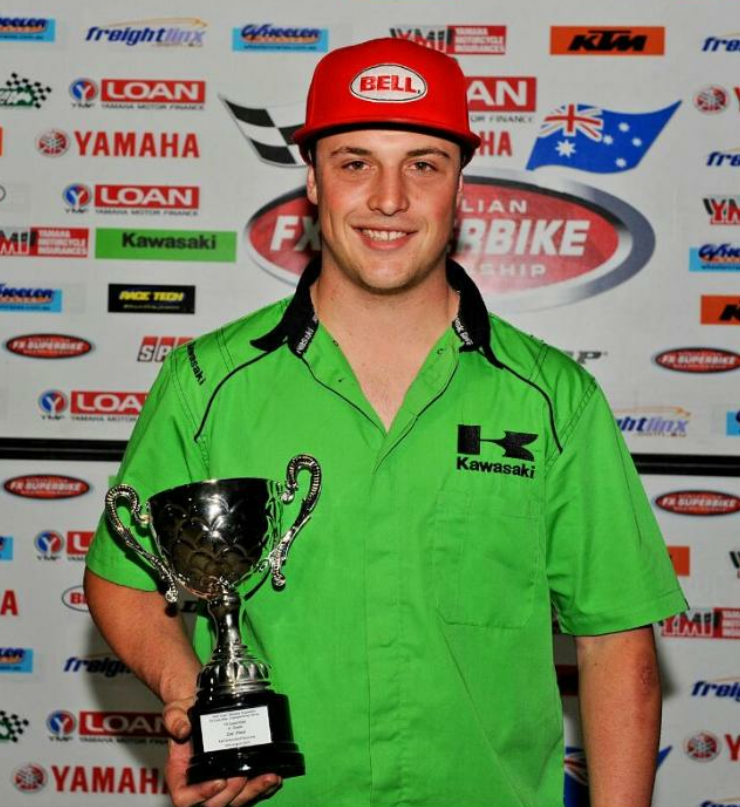 Born and bred in Nulkaba, NSW Matt Walters has been racing motorbikes since he was 5 and now races the 2019 Australian Superbike series.

At age 5 Matt’s parents took him down to the local minibike club at Kurri Kurri and after watching his friends race knew he wanted to do the same.

Coming from a family of racing enthusiasts – his parents always around fast cars, bikes, boats, sprint cars or speedway bikes – jumping on the bike was natural to Matt.

With his brother Mitch also into racing, his family has been the biggest support along the way including his father-in-law. “If there is anyone at Wambo Coal reading this, please tell my father-in-law John Blackham to have a good day at work,” Matt laughed.

When Matt isn’t racing, he is working as a Mechanic at his family owned bike shop, Kawasaki Connection Cessnock. Whether it’s on the track or at work, he is extremely passionate about what he does.

Throughout his junior days, Matt took home top place at a few Australian and State dirt track championships before moving to road racing where he won the Australian Superstock 600cc Championship in 2010. Matt went on the win the 1000cc Pro Stock Championship as well as the Australasian Superbike Championship.

Achievement after achievement, Matt continues to make a name for himself in the motorcycle racing arena and was awarded best rider for the year of 2013. “A definite highlight for me was when I had the opportunity to race as a wild card in the World Superbike Championship at Phillip Island (VIC) for an Italian team in 2014 and 2015,” said Matt.

“I learnt a lot about how a factory team operates which was a big eye opener…unfortunately it didn’t go to plan, and I crashed out of it both years,” Matt added.

Learning lessons from the moment he started, his racing journey has had its fair share of ups and downs. “When I first started road racing, I was learning about how to set up for a race weekend and what we needed to pack and be prepared for, my mum and dad transported me to all events,” said Matt.

“We had two race weekends back to back and I crashed the first weekend at Eastern Creek (NSW). In between the two weekends I had unpacked and repacked the van with the bike in pieces and once we got to Warwick (QLD) I realised I had left the tank at home in Cessnock,” Matt laughed.

“I definitely want to have a crack at a world championship and have an opportunity to mix it with the best. Until then I will keep racing here in Australia and try to win an Australian Superbike Championship.”