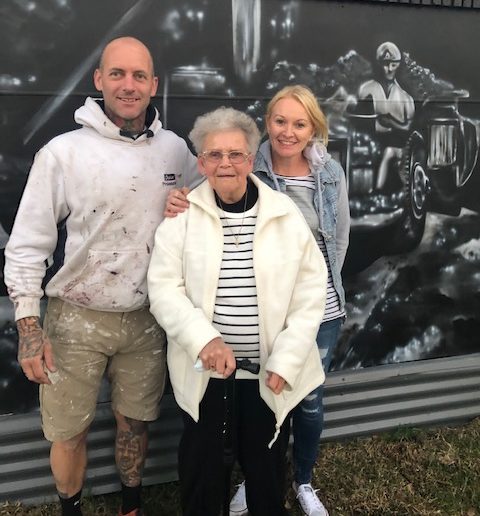 Kirsty Harrison (Spiteri) has found a memorable way to pay tribute to her family’s long history in coal mining.

Kirsty would be the first to tell you she has a bit of a quirky streak. In her family, she’s the one who takes on the unusual renovation projects or upcycles the vintage furniture no one else wants. “I like making stuff,” she shrugs, smiling.

It was this sense of imagination – and a photo of her Pop – that led her to commission a mural of him on their latest renovation project.

The ‘Coal Miner’s Cottage’, as it’s going to be called, sits on a corner block in Singleton’s William Street. Its original weatherboard exterior has been painted powder blue; the verandah, closed-in when Kirsty and husband Ben bought the property earlier in the year, has been restored and opened back up.

And to the right of the verandah, on the front face of the house, is a huge black and white mural of William “Sunday” Thompson, exiting an underground mine portal in a shuttle car.

Kirsty and Ben bought the property with the aim of offering it as a serviced rental “to accommodate predominantly mining people,” Kirsty explains. But she also wanted to do something a little bit special.

She decided – as a way to pay tribute to her grandfather and because of its mining-town location -that they should name the property.

In keeping with the stunning original features they found hidden under the “almost derelict” interior, the ‘Coal Miner’s Cottage’ will eventually have a custom metal gate featuring its name, as well as underground head-lanterns and shovels worked in metal.

The mural idea came later. Kirsty calls it one of her “crazy conceptions,” and it was another way to acknowledge her grandfather, and the family’s strong mining heritage.

“The photo of my Grandad was on our kitchen bench,” she says. “When I went home I looked at it and it was like an epiphany. I thought ‘I have to have Pop on the wall!’”

Her paternal great-grandfather, Robert (Bob) McLennan, was a Cessnock local and the first miner in the family. His daughter Colleen would go on to marry William Thompson and raise another generation of miners.

‘Pop’ himself began his mining career in Wollongong aged just fifteen, working as an operator. He later moved his family back to Cessnock, and took on jobs across the Hunter and the South Coast.

“Everyone knew my Pop as Sunday Thompson,” explains Kirsty. “He worked in mines such as Bellbird, Burrajalong, Liddell and Aberdare East (where we think the photo was taken).”

Although William passed away almost thirty years ago, the family mining tradition continues.

In fact, Kirsty says, “out of 12 of Pop’s grandkids, 10 households are mining households. All my family are predominantly here, working in a number of mines around Singleton and the Hunter Valley.”

Her own daughter is now a fifth-generation miner, having recently taken a job as an operator at Mount Arthur.

As for Kirsty, she has just left the industry after 25 years in various maintenance planning and procurement roles but says her “mining connection has not dissolved.” In her new position with the Royal Australian Air Force (RAAF)  – as the ‘Classic Hornet Disposals Project Manager’, she focuses on maintaining a strong link between the Defence Force and local area industry.

When it came to creating a tribute to ‘Pop’, Kirsty approached graffiti artist Jamie Curtrupi – a former school friend of hers from Singleton – who now works on the Gold Coast. Though his commissions are usually for larger organisations – think SeaWorld – and are slightly more organised than the pictures Kirsty gave him, he liked her idea and agreed to do the mural.

Kirsty kept the project secret from most of her family, and when it was ready to unveil, she and three of her cousins had to lure the rest of the family to Singleton with various – fictional – reasons.

When ‘Nan’ Colleen Thompson and the family were gathered at the cottage, Kirsty told them “I had a little surprise for them; that one of my normal, ‘out-there’ ideas had come to fruition,” she laughs.

Kirsty moved everyone out the front, gave Colleen the photo of Sunday to hold, and unveiled the mural. “Her [Nan] and my aunties started crying straight away,” she says.

To Kirsty, the fact that she was able to get the family together to remember Pop and their mining history makes the mural worth the time and effort.

“I’m super family-oriented,” she says. “If it’s something that will get the family to focus, or bring the family together, then I’m in it.”