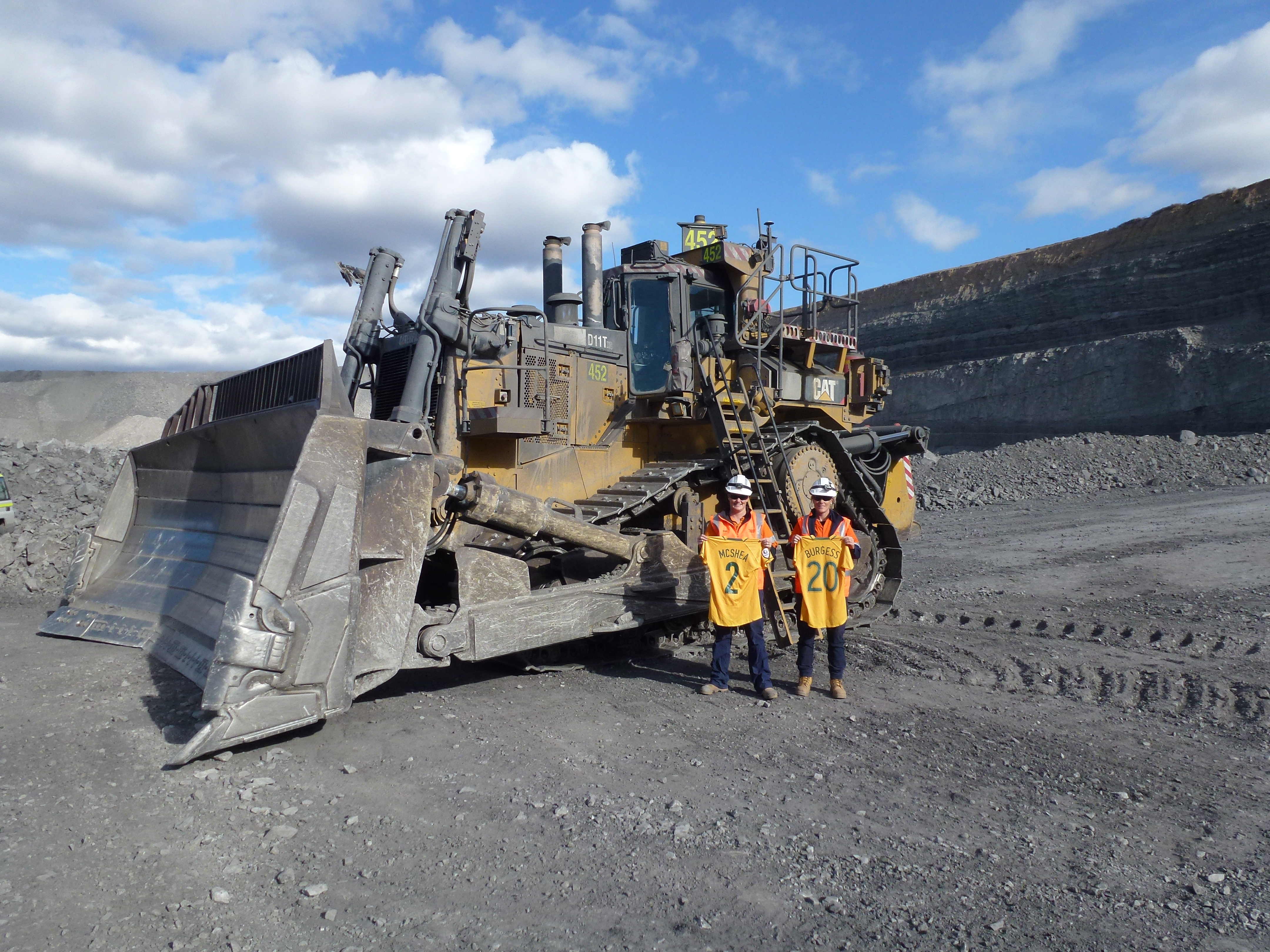 They may have traded in their soccer boots for work boots, but former Matildas team-mates – now mining mates – Kate McShea and Joey Burgess are still behind “the girls.”

Between their shifts at Glendell Coal Mine, Kate McShea and Joey Burgess have been keenly watching the Matildas’ progress through the FIFA Women’s World Cup, and despite their recent loss, were still stoked to see them beat old rivals, Brazil.

“Brazil knocked us out of the 2007 World Cup … it still kind of hurts,” laughs Kate. “That rivalry’s always going to be there, and this time the girls got up and beat them, so it was good to get a bit of revenge.”

Showing that they still support the team all the way, Joey was up to watch that match at 2am. “I took leave so I could watch the game,” she says. “I couldn’t go to sleep afterwards; I was too excited!”

We’re sitting in Kate’s kitchen on a fairly overcast Singleton afternoon. From the living room next to us come the cheerful noises of Kate and partner Lisa’s two small boys as they play. As I get the voice-recorder set up, Joey, sitting next to me, dribbles a soccer ball casually from foot to foot. So we begin – naturally – with how they each got started in soccer.

Kate’s interest in soccer was sparked by her cousin. “Inseparable” as children, she used to watch him play, and decided she’d sign up for a team as well. With her family being from England originally, she jokes that soccer is “in the blood.”

Kate worked her way up “through the ranks”, playing for the Queensland Academy of Sport for several years, as well as for Brisbane Roar (then Queensland Roar). She was selected to play as defender for the Matildas in 1999.

Like Kate, Joey got involved with team sports during school. “Netball was my main game,” she says, “but because the girls at school played soccer, I got into a team, too.”

Growing up in Campbelltown, Joey played for Sydney FC as a mid-fielder. She was selected for the Matildas in 2005, and later relocated to Queensland, where she joined Kate at Brisbane Roar.

The two initially met as rivals, and Joey recalls that – in true Aussie spirit – Kate was fond of some friendly banter. “She’d try to get in your ear and put you off your game,” she laughs.

Though today’s Matildas are professionals, both Joey and Kate had to hold down full-time jobs while they played. “We were working full-time plus trying to train full-time and trying to balance our lives. It was pretty tough back then!”

“You wouldn’t change it though, would you?” says Kate. “We had some pretty good times.” Joey agrees. “There’s nothing like putting on the green and gold,” she says.

“Walking out onto a field in front of a big crowd is a feeling that nothing can emulate. It’s surreal. There’s nothing better than when the crowd goes crazy when a goal gets scored,” says Kate. “It’s a massive buzz,” adds Joey.

But after ten years and 73 caps, Kate decided it was time to move on. “To be honest, it’s not like it is these days. We were going to be away more than we’d be at home and it just became a bit too hard.”

Chasing a different challenge and encouraged by both the mining boom and by former team-mates already in the industry, Kate felt it was the right time to apply for a coal-mining job. She was taken on at Glencore’s Glendell operation in 2009 and has worked there ever since.

It took a little longer for Joey to reach the same decision. She retired in 2014 after five years with Brisbane Roar, but was “lured back” to play for the Western Sydney Wanderers for a season in 2016.

It took a little longer for Joey to reach the same decision. She retired in 2014 after five years with Brisbane Roar, but was “lured back” to play for the Western Sydney Wanderers for a season in 2016.

Despite her love of soccer though, Joey says she’s always had her eye on coal mining. “I just wanted to drive big trucks,” she says.

Initially, she got her Heavy-Rigid licence because her older brother didn’t think she’d be able to drive trucks at all. Her response? “I said ‘Yeah? I’ll show you!’ It gave me that fire to go and do my licence!”

Not only did Joey get her licence, she got a job driving trucks for TNT in Sydney, delivering diesel and truck tyres. Having showed her brother up in a big way, she put in her application for a trucking traineeship through Glendell and started work there in 2017.

Although she’s a relative newcomer to the industry, joking that she’s a “freshman,” Joey is keen to take on any training the company offer in the future. She’s been trained to operate Glendell’s Caterpillar 793 and 789 trucks and has recently qualified on the 16M grader.

You’d think she’d be used to the equipment by now, but Joey admits she still gets a kick out of driving the trucks. “I’m still like oh my God, I love driving these,” she says. “I love it when I’m on a truck – I’m like ‘yes!’” she laughs.

In addition to her truck skill, Kate is one of only two women trained to operate Hitachi EX2500 excavators at Glendell, and only one of a handful who operate the 854K Wheel Dozer.

She feels that the site (and the industry in general) has been encouraging to its female workers. “Out there it’s been good. You never felt like you couldn’t do something. If you aspired to be on a digger, they were pretty supportive and would help you get on whatever you wanted to get on.”

Kate and Joey both think there are parallels between sporting and mines. “Mining, like sports, it’s team-based. You look out for one another,” says Kate.

“When you think about it, athletes are all fit, healthy people who are all pretty dedicated. You also tend to be pretty particular and set high standards for yourself. You take pride in your work. You’re used to self-discipline and long hours.”

Kate and Joey are gratified to see how much more public interest and support there is for The Matildas and for women’s sport in general these days.

“It seems like the face of female sport is getting out there more, which is great,” she continues. “We hope we played a small part in that.”