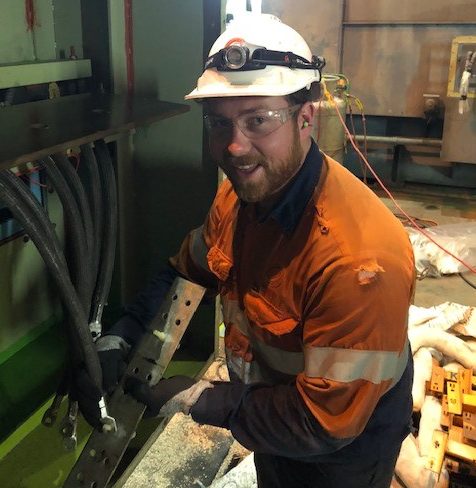 Daniel Beavan is only months away from completing not one but two trade qualifications and was a finalist for Apprentice of the Year not once but twice!

HVTC Hunter’s Daniel Beavan was a finalist at both the 2018 NSW & ACT Group Training Awards and the 2018 Hunter Manufacturing Awards and it’s easy to see why.

A qualified fitter machinist after finishing a 4-year apprenticeship, Daniel took on another huge commitment and applied for an electrical apprenticeship with HVTC.

“When I finished up my fitter apprenticeship it was hard to find work because of the downturn. I was only 21 so I decided getting upskilled would be a smart move and I thought that the two apprenticeships would complement each other,” Daniel said.

“A dual trade is a fantastic achievement – one that involves a lot of patience and perseverance. It takes a lot of passion and motivation to complete one apprenticeship, let alone two. Daniel should be incredibly proud of himself,” she said.

Initially hosted to Donaldson Coal’s Abel mine site, Daniel applied for an apprenticeship at Origin Energy’s Eraring Power Station when the mine was placed into care and maintenance. Origin Energy Leading Hand and Apprentice Mentor, Todd Horvat, said the additional trade qualification gave Daniel a step up over the other recruits.

“From day one you could tell Daniel was really switched on. Having already completed an apprenticeship he knew what to expect and the way he took up the electrical trade spoke volumes of his passion for the work. Some apprentices stand in the shadows and wait to be told what to do, whereas Daniel is more of a leader.” Todd said.

It’s this dedication that led Daniel to be nominated twice and to receiving a Highly Commended Award at the Hunter Manufacturing Awards. And it’s not the first time he’s been recognised for his hard work. Daniel was also named School-based Trainee of the Year when completing his mechanical trade.

“It’s always an honour to be nominated for an award as it reflects how much effort I’ve put in both at work and throughout my training,” Daniel said.

We asked Daniel the question on everyone’s mind. Fitter or leco? Which is better? Diplomat that he is, he wouldn’t choose one over the other, saying that both have their ups and downs and that having the knowledge and skills from both often makes his job easier.