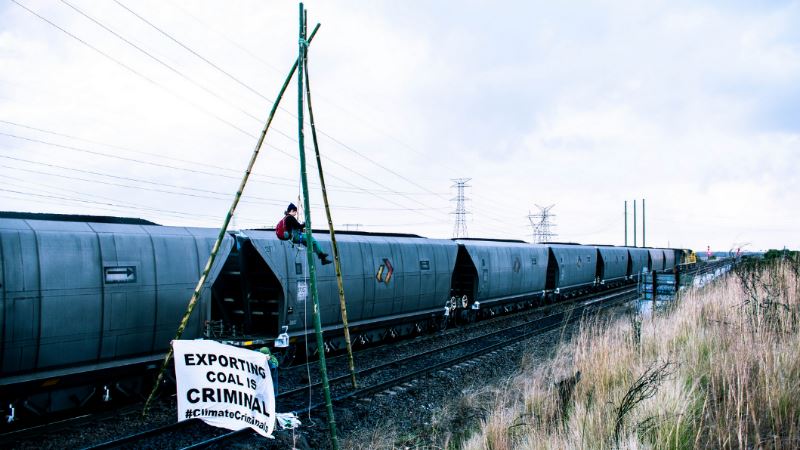 It may sound like a huge overstatement, but in ways not dissimilar to Islamic State saying, ‘convert or die’, anti-coal activists have been busy lately performing their ‘our way is the only way’ song and dance.

Frontline Action on Coal Jihadists have recently been busy stopping trains, access and traffic, and hanging from vital and dangerous machinery in the Hunter this month.

Their stupidity put a halt to coal train movements at Sandgate blocking the rail when one climbed onto a train. Activists also set up large tripods on tracks, suspended themselves over the rail line and a 96-year-old WWII veteran locked himself onto the line at Tighes Hill. Frontline Action said 50 people also locked themselves onto the coal loaders at NCIG, while 20 Knitting Nanas blocked road access to the terminal – and there was more. Eventually of course all were removed and or arrested.

One of the funny things about the whole approach by these environmental Jihadist’s is how time and time again each incident is facilitated using society building products courtesy of…you guessed it…Mining!

The group live streamed their shenanigans on social media using devices built with coal and other minerals. The chains and other steel devices they used to secure themselves are only made possible thanks to coal. In fact, their war on coal is made entirely possible by mining. Don’t get me started on the many dozens of vehicles they roared into life to get to their protests.

I call it convenient ignorance. I would bet that other than responsibly putting their recycling into the correct bins before garbo night, pretty much none of these people would be any more environmental than your average hardworking coalminer.

In fact, I would bet many well-informed coalminers probably understand and act more environmentally than many of the activists in the comfort of their own homes.

“Australia exports more coal than any other country, this makes us one of worst contributors to climate change,” a statement from a Jihadist named Ms Barron read. What she failed to mention is that those exports have also created one of the best societies on the planet for her to live and indulge in. Take away her 21st century luxuries, conveniences and expectations and I doubt she would remain so environmentally staunch.

Frontline Action on Coal organisers described it all as a nationwide cry for urgent action on fossil-fuel-driven climate change. I’m describing it as a delusional approach that is slowing down our environmental evolution, that believe it or not, coal can play a positive part of through emerging technologies and ways of using the mineral.

These people would achieve far more with a measured long-term societal approach that is based in reality, sensible debate and action that is actually achievable over the medium to long term.

And don’t forget readers…It’s you, the long-suffering taxpayer that probably helped pay for these protests.