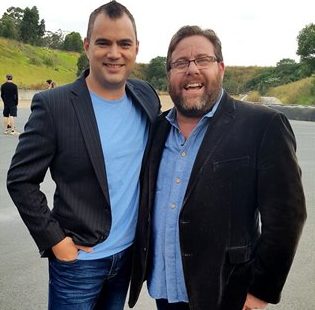 It’s not unusual for most mining employees to have a hobby or job on the side, but Dan Wilson is one Operator putting in the hard yards to make a lifelong ambition come true.

Some would say raising five kids and working a fulltime job in the mining industry would be enough for any one person to manage, but Yancoal Mt Thorley’s Dan Wilson has his eyes set on acting and is giving it his best crack at making it on the big screen.

Having already appeared in “a lot’ of short films and a few feature films, with a few TV commercials and music videos to go along with it, life’s been “pretty hectic” since making the decision to pursue his acting career. Dan has even featured in a few Sundance Film Festivals and a short film festival in Spain.

Dan explains why he is so determined to make this work. “I did drama at school but then went off on a different path working an everyday job, but a few years back was hit with a burning desire to go for it. I became focused on making the best go of it I could, no matter what happens in my personal life.”

Dan has an agent on the Gold Coast that assists with getting his portfolio in front of the right people, though it’s his hard work and plenty of travelling for auditions and training that is getting his name out there in the world of cameras and red carpets. He wouldn’t be able to do it without the support of his large family though.

“I wouldn’t be able to do it without them backing me, and at times it is hard to get that balance right. On nightshift I am usually up for when they are home from school, and when it’s on the nightshift weekend the fiancé takes then to all the social stuff. We have a really good thing going on, it works.”

“I really do wish I had more family time, with shift work and being in Sydney a lot, it sometimes feels like I don’t get a lot of time with them. But every person with a success story tells where they had to work 7 days a week for however many years before they made it.”

Acting may be a burning desire, though it’s his love for driving the big gear that has him boasting, “I am pretty much living the dream at the moment.” Having taken the gamble and switching from a smaller pit to Mt Thorley under the new look Yancoal, Dan has just completed a medical for a full time job.

“I was on a dozer at another pit prior to coming to Mt Thorley, and I knew by switching workplaces I would go back to square one and mainly on a truck. But I have kept my nose clean, I’ve done plenty of overtime and now it’s my time.”

Now he’s where he wants to be in his mining career, and things are starting to take a positive direction for his acting career. He attributes being able to follow his dream to his mining job which is providing financial stability for his family.

For those of you who also have a passion waiting to be kindled, Dan’s message is simple; Never give up. Never lose vision of living your dream. It takes a lot of hard work and plenty of knockbacks, but it also only takes the right “yes” to open doors.

All the best Dan and keep us in the loop. We have no doubt that doors will not only open for you, but for our region in this field as well. If you want to stay updated on Dan’s ride, follow him on Instagram@danielwilson7460