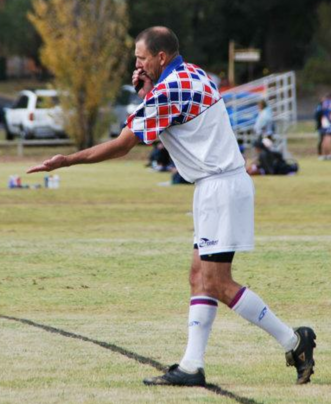 Touch football has played a massive part in Barry Nichols’
life, notching up over 35 years as a player. Now he gives
back to his beloved sport as a referee, on both the local
and international stage.
“I only took up refereeing as I was retiring from playing, and it’s turned out to
be bigger than Ben Hur.” Barry says of his newfound passion where he’s
switched the ball for the whistle. “I have been playing touch for 35 years in
Singleton and surrounding areas and was a representative for around 10
years or so. I was the president of the Singleton Junior Association for 6
years, though I’ve been involved with them for over 15 years. I decided to step
down from that and concentrate of my refereeing.
The shotfirer from Glencore’s Ravensworth mine achieved his goal of
becoming an international referee gaining his black international badge
at the Nationals this year.
“I don’t usually do specific training, though I did start last Christmas for the
upcoming nationals because I had the target to get the international badge, so
I did a fair bit of on holidays beach running and also as a shot firer you’re
doing a lot of walking during the day which helped.” Barry said.
“I was invited to the nationals which is an invitational event where I was lucky
enough to get my badge, and then two weeks later I received an invitation to
referee at the Youth World Cup in Kuala Lumpar from the Federation of
International Touch. I was nominated for the opportunity and was lucky to be
selected. There’s some really good referees out there and to get down to the
top 20 was great.” Barry flies out in August to Kuala Lumpur but says
unfortunately his schedule is so hectic he probably won’t have time to do
touristy things.
Barry’s got to where he is entirely self-funded, he believes it’s important
to give back to the sport you love.
“I’ve never had the benefits of sponsorship and I don’t like going out and
asking for a handout, but I am very open if any businesses or groups would
like to assist. It truly would mean the world to me and there will be plenty of
exposure. At the end of the day I will be representing my country on the world
stage at an international tournament, and that’s not bad for an old bloke from
a mine site in the Hunter.”
We’re sure there are businesses out there who would see this as a great
opportunity to help one of our local lads on the world stage. To be put in
contact with Barry contact us here @ The Coalface. All the best Barry, don’t
blow the pea out of the whistle though!