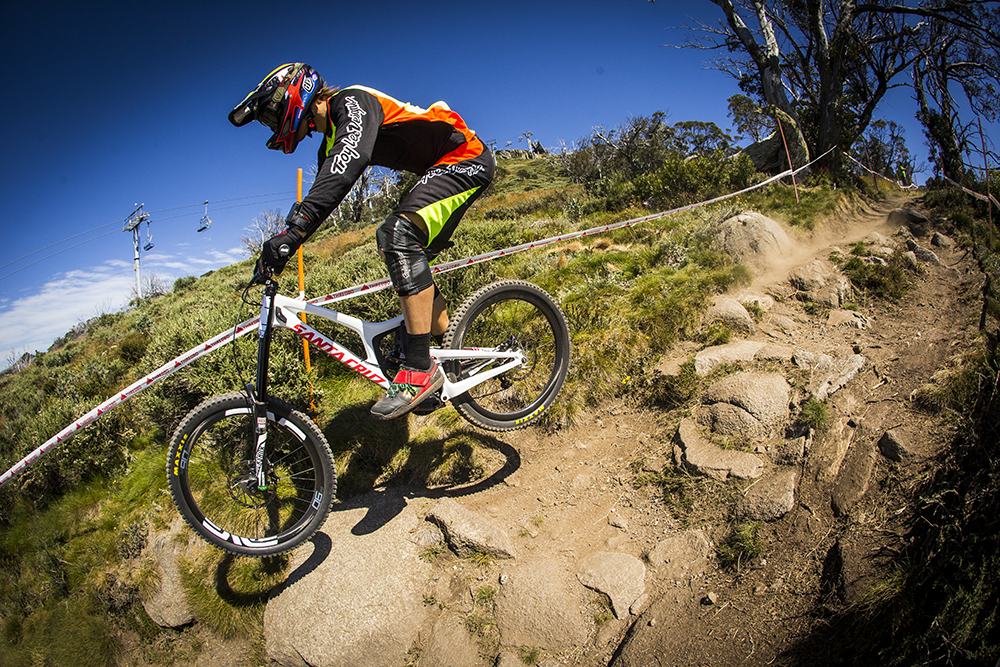 When it comes to setting goals and following dreams,
Graeme Mudd is at the top of the hill. It was hard not to
get lost in his adventures when we sat down to talk.
Graeme is a fitter machinist by trade, completing his apprenticeship at Abel
Underground through Hunter V-Tec. Currently, he is working at Integra
Underground for Walton Mine Services as a development fitter on production.
But what’s makes Graeme different than most of us is that when he takes time
off work, it’s not to go on a relaxing holiday, but instead to chase after his
dream, competing in the Downhill Mountain Bike World Circuit.
Downhill mountain biking is not for the fainthearted. Riders traverse their way
down steep rough terrains featuring jumps, drops, rocks and other obstacles
at death defying speeds. Graeme has dedicated himself to competing in this
extreme sport and seeing just how far he can go. But it hasn’t come easy.
&quot;Basically, for the past 3 years I have worked 6 months here locally in the
mining industry, and then spent the remainder of the year overseas competing
in the Downhill Mountain Bike World Circuit.&quot; Mudd says with determination in
his eyes. &quot;For my age I am late onto the scene, but when weighing up what
the future would hold I thought it would be best if I completed my
apprenticeship, so I had something to fall back on. Now it’s a mix of work and
following my dream.&quot;
Graeme at first entirely funded his own journey and his commitment paid off
when he was lucky enough on that first tour bank in 2013 to take out a
Crankworx pro men slalom event. &quot;For me that was just the beginning of the
desire to achieve more.”
Graeme will this year split his time between Canada and Europe between the
Crankworx and World Cup Events. &quot;I base myself out of Quebec in Canada.
Quebec is such an amazing place. You have your favorite events and tracks,
and there is a track there that is one of my favorites that I do really well on.”
It’s not a cheap exercise either. His first full race season in 2015 was self-
funded and cost approximately $50k. Last year he was lucky enough to be in
a factory team, and this year he has teamed up with local bike industry
supplier Lusty Industries onboard Santa Cruz bikes. &quot;The guys at Lusty
Industries are nothing short of amazing. It’s a really professional and friendly
environment and I’m so glad to be part of the team. With their support, and
the fact I’ve done more preparation at home, I think I will give this World
Series a fair shot.&quot;
Graeme attributes much of his success and the ability to follow his own path
to his dad. &quot;My old boy has been in the mining industry all his life, and it was
the sacrifices he made when I was a kid that gave me opportunity to develop
my skill and be living this life. It’s a tribute to him and the man he is.”

Graeme is very excited about heading off to compete this year, but he says it
wouldn’t be possible without all the support he’s received. “To be able to
achieve my goals knowing I have the support of people back home is a dream
come true. I have to thank my employer Walton Mining Services for their
ongoing support. They are a fantastic company to work for. I also can’t thank
Lusty Industries enough for giving me a shot. I’m going be giving it my all to
make them proud.”
It looks like it’s going to be a big year ahead for Graeme and all of us in the
Hunter will be wishing him luck.
Follow Graeme’s journey on Instagram – @graemebobmudd.