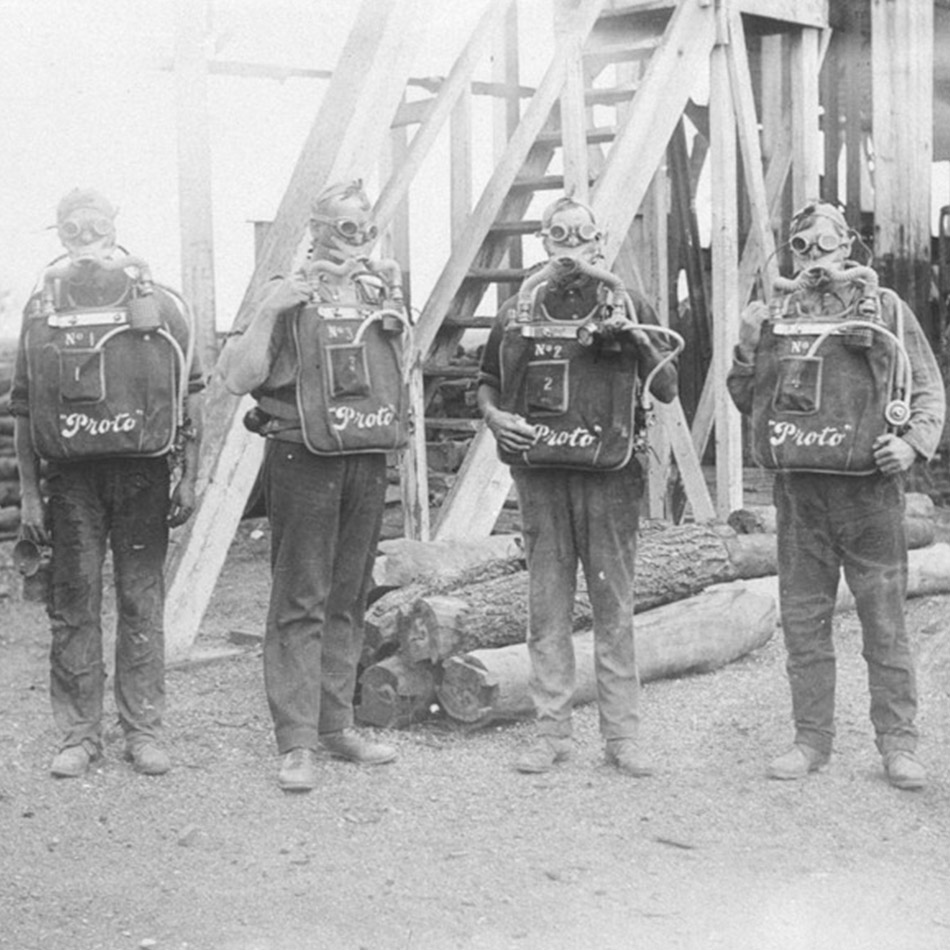 For more than 90 years Mines Rescue has been helping
make sure our workers make it home safe to their families.
But it took terrible tragedies before that became possible.
In the early days of coal mining, terrible and tragic mining disasters occurred
due to poor safety standards and lack of rescue services. Between 1887 and
1921, 293 miners were killed in NSW alone.
Then on September 1st, 1923, the Bellbird Mine Disaster occurred in which
21 miners lost their lives. A fire occurred that was likely caused when liberated
gases exploded. Miners working underground are believed to have perished
from carbon monoxide poising while attempting to flee to the surface. Another
miner died in the rescue efforts.
After the disaster a coronial inquest and royal commission extensively
debated the value of breathing apparatus and the establishment of
central rescue stations. As the worst disaster to occur in the Northern
District it was given wide coverage in the press, highlighting the
hazardous nature of coal mining.
It focused much needed attention and increased public awareness on the
need for an organised system of mining rescue using the latest developments
in artificial breathing apparatus. Ultimately, it is believed to be a key event that
led to the change of legislation and the eventual formation of mines rescue
stations in NSW.
This issue of establishing mines rescue stations staffed with trained personnel
was not a new idea and had been advocated since the early part of the 20 th
century with many in the mining community supporting it. However, it took the
Bellbird tragedy and the election of the Lang Labour Government before
action was taken. A bill to establish mines rescue stations was tabled in the
NSW parliament on 13 November 1924 but was stalled. Then in 1925 Labour
introduced their Mines Rescue bill. It differed from the previous in that it
placed the obligation of financial liability for funding the stations on the mine
owners. The bill was passed without trouble and the Mines Rescue Act
became operational on 31 December 1925.
The Act governed the establishment of rescue stations and
brigadesmen teams, and instigated equipment and maintenance
standards. This legislation remains the foundation for governing mines
rescue operations in NSW today.
The first mines rescue station in NSW began operations on 20 March 1926 at
Abermain. Stations in Newcastle, Wollongong and Lithgow opened shortly
thereafter. These central rescue stations were equipped with sets of breathing
apparatus, other necessary appliances and a motorcar.

The focus on safety and incident prevention has come a long way since 1925.
During the last nine decades it has been a major contributor to significant
improvements in safety to the point where NSW coalmines have one of the
highest safety records in the world.