Since September, NSW has been ravaged by unprecedented bushfires. Without the brave NSW RFS volunteers that have been on the front lines, tirelessly protecting our families and homes, it would have been much worse.

A little background about the NSW Rural Fire Service (NSW RFS). Starting back in the 19thcentury, it’s now the world’s largest volunteer firefighting organisation, with over 70,000 volunteers and a little over 900 staff. That’s 2002 brigades, 108 local government areas and 45 districts.

The area they are responsible for protecting encompasses a geographic area of 800,630 square kilometres, approximately 10.4 percent of Australia’s land mass. So far this fire season, more than 100,000 square kilometres of that land has been burnt.

We headed over to Hunter Valley Fire Control Centre (HVFCC) in Bulga where we sat down with Leanne Bell, Operational Officer and Media Liaison. As you can imagine, Leanne’s job is a difficult and demanding one that has been hugely compounded by the recent bushfires.

The HVFCC services both the Singleton and Muswellbrook Local Government Area’s. Though we quickly learnt that the many brigades and districts don’t operate alone, rather it’s a symbiotic relationship that spans across every single brigade in NSW. And every one of those brigades have been pushed to the limits in what has been the worst fire season that Leanne has ever seen.

“So much of the state has burnt. Bush fire season starts in October and normally we see it slowly travel down the coast, but this year it came so fast. We don’t normally end up down the south coast until February. This year it started as early as September, when we started sending up teams and specialists up north to assist,” Leanne tells us.

“Then we started seeing fires along the mid coast and the big Gosper’s Mountain fire started up and started approaching our district. From then it’s been all hands-on deck on the home front, and it hasn’t really stopped since. And it’s not just our district that have been fighting here. We’ve been assisted by other districts when we needed it because we didn’t have enough resources. Just as we support them, they support us, it’s really a remarkable team effort.”

The last couple of months have been incredibly tough and there’s been volunteer firefighters on the ground every single day. Working 12 hour shifts, in intense conditions. Gale force winds, incredibly hot days and hardly a moment’s reprieve.

There’s also been the tragic loss of lives and property. But despite everything, Leanne says the attitude among the RFS remains positive. “At times it feels like it’s never going to end, but these guys never give up. They are such amazing people that just keep going, nonstop.”

I ask Leanne why she does it. “My brigade is my other family. We are all good friends and have built such strong bonds. Then there’s the satisfaction of doing what you set out to achieve working as a team. Protecting people and their livelihoods and their properties is rewarding work. You also really appreciate and feel humble when people acknowledge what you do. Being thanked by strangers on the street. It really makes it worthwhile.”

70,000 plus amazing people putting their lives on the line. Completely voluntary, no pay. Words are not enough to thank them. I ask Leanne how people can help.

“We’ve already received so much assistance which we are so grateful for. The community support we have received is simply fantastic. We’ve been contacted by some of the local mines to see how they can help and so many businesses have shown support. We’ve received so many donations of water and nonperishable items which has really helped. But what we appreciate most is financial assistance as we can then use it where it’s most needed.”

But no sooner than she says this, she’s quick to demonstrate how selfless these guys are by pointing out other people that desperately need help.

“Please don’t forget about all the other people that have been affected. The wildlife, the farmers. We encourage people to help organisations like Blaze Aid which helps farmers rebuild the thousands and thousands of kilometres of fencing that been lost. Or the Red Cross and the Salvation Army that are behind the scenes helping people and communities that have been affected by the fires.”

Hopefully we’ve seen the worst of the bushfire season this year, but we’ve still got a lot of work to do to make sure we’re prepared in the future. Leanne says they are still expecting a tough couple of months ahead. Although there’s been some rain and a little reprieve it’s not enough and some fires continue to burn which they are still hard at work containing.

With lightning the main cause of all the bushfires, preventing fires is an almost impossible task. All we can do is try to be better prepared and ready to take action to contain fires as quickly as possible.

A lot of people blame the lack hazard reduction as the reason why this fire season has been so deadly, but Leanne explains how it’s only one tool among many and hazard reduction is much more complex than people realise.

“The life span of hazard reduction is only about two years. Certain types of vegetation can only be burnt over a certain period, you need to allow time for vegetation to rebuild between burns or you risk losing species of flora.”

“Fire conditions will also determine whether it will even be effective. I’ve seen fires go straight through hazard reduction areas that are less than a year old, but then I’ve also seen fires that are stopped by areas much older. So many factors come into play,” Leanne adds.

There’s a lot of legislation that has to be met before any hazard reduction is approved. It can be daunting for landowners but it’s actually pretty easy for a landowner to get the licence if they meet the environmental requirements. Because ultimately the responsibility lies with the landowners.

“There’s many effective measures that landowners and land managers can take. Preparation is key. Hazard reducing by fire with correct licenses, slashing and remove understory fuel, approved clearing. Pick the assets you need to protect and put your preparation into it. Reducing fuel load is important, and many steps are very simple and easy,” explains Leanne.

Leanne recognises that managing large bush lots can be a challenge which is why the RFS is always there to provide advice. “We are always happy to advise. And not just the RFS but Local Land Services will also provide advice to landowners. We can assist with hazard reduction burning, and as part of your hazard reduction approval needs an inspection, we can also point out other things you can do and be on hand to help.”

Talking to Leanne and some of HVFCC team, they are quick to dismiss what they do as heroic. They’re just doing a job that needs to be done. But this I have to disagree with them. These guys are heroes. And we are so lucky to have them. And not only the brave people who make up the NSW RFS. The men and women of the National Parks Service, the Forestry Corporation of NSW and Fire and Rescue NSW. We thank each and every one of you. 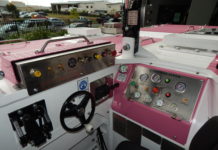 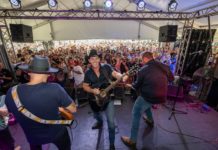 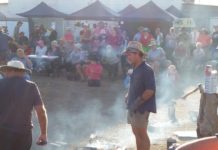 Drovers Campfire Back in Boggabri